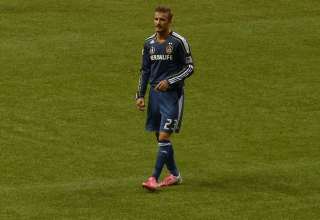 “They [referees] are becoming the stars of the MLS, and that’s obviously not what teams want. You want the players to be playing out there. You want it to be fair. I just don’t think the consistency is there. I think there are bad calls, and we’ve had the majority of bad calls over the last few games. It’s ruining games. It’s ruining our preparation for games. I’ll probably get in trouble, but it’s gone on too long now. We want that consistency to be there, and we want to keep our players on the field.”

That’s the famous rant David Beckham uttered in April. Frustrated by what he felt was poor officiating in the league, he let fly with a very public attack on the league.

Now, after Saturday’s 2-2 draw with Toronto FC at the Home Depot Center, will those words come back to haunt Beckham?

In a season marred by some ugly tackles, injured stars and star suspension, Beckham’s awful challenge that knocked TFC’s Tony Tchani out of the game was the talking point of the match.

And, no doubt, it will be looked at by the MLS disciplinary domos later this week. This isn’t unusual, MLS, as a rule, reviews all major incidents from the weekend’s matches.

Inexplicably, Beckham only saw yellow — his seventh of the season — for scissoring Tchani’s trailing leg, a classic limb-breaking move. Make no mistake. That’s a cut-and-dried red. No debate.

Tchani was taken to hospital on a stretcher at halftime.

With no red on the play, the Disciplinary Committee will have to be unanimous in deciding that Beckham deserves a suspension for the foul.

But, make no mistake; this should be a unanimous vote. MLS came up with stiff suspensions on tackles that injured stars Javier Morales and Steve Zakuani; now, the league must show that it can also mete out justice to its star players, too.

Unfortunately, the tackle overshadowed an audacious two-goal effort from Alan Gordon, the second coming in stoppage time, that earned the Reds a road point.

Toronto FC did show resiliency after losing Tchani and Jacob Peterson — who looked to reaggravate his ailing hamstring — in the first half. The Reds went to the dressing room after yet another dreadful start to the game. After Danleigh Borman absolutely blew his marking assignment, Chris Birchall — the Trinidad and Tobago international — was left wide open to slot in the opening goal before the game was two minutes old.

Miguel Lopez could have doubled the advantage while TFC was still reeling, but he drove his effort off the inside of the post.

Gordon, coming off a long lay-off, came in for Peterson, and made his impact felt in the second half, scoring against his former employers to tie the game. The goal came in the 67th minute, as he raced on to a perfect left-footed cross from Borman.

Maicon Santos almost gave the visitors the lead when his shot crashed off the bar just a couple of minutes after the Gordon goal.

The Galaxy, though looked to have the game won in the 90th; after Toronto FC failed on a couple of attempts to clear a ball out of the danger area, Juan Pablo Angel ran into the box and hammered a volley home.

But the last page of the script hadn’t been written yet; deep into extra time, Gordon ran onto a ball that was pinging around in the Galaxy penalty area and drove a volley into the top corner.

This should have been his night. Instead, this is a night to discuss how MLS should handle Beckham, who now looks like a man who likes us to do as he says, not as he does.