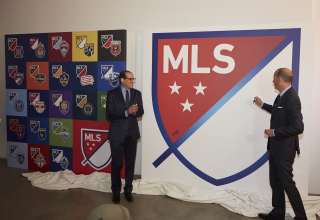 Major League Soccer has a new logo. Refreshingly, it does not have a soccer boot crashing into a ball, as the outgoing one did.

(For two decades, it was nice to be reminded by a soccer league that has “Soccer” in its name that, indeed, its teams do play soccer.)

The new logo is remarkably simple, with “MLS” in a simple wordmark on a stylized shield split into two halves. One half bears three stars — and the other is left blank. The shield’s colour scheme can be altered to match any of the league’s teams — and the cynic will say that’s a reminder of the fact that, even though you may have a club to call your own, in the end it’s the league office that controls contracts and calls the shots.

It’s also incredibly bold for a league to announce a change in the way it markets itself, going into a year where a new Collective Bargaining Agreement needs to be negotiated. The current CBA expires after this season.

“Our new brand and crest are the result of an iterative process that has helped us better understand the world in which we operate in. The outcome is not an evolution, but a revolution,” Howard Handler, the league’s chief marketing domo, said at a news conference held Thursday in New York.

But there’s something I hope came up at the marketing meetings. If MLS has decided to go ahead with a major rebranding of itself, it should tackle what is maybe its own worst enemy. And that’s its name.

Sure, changing the name of the league would cause some bumps and bruises. The MLS Cup would need to become the ______ Cup. For long-time followers of the league, MLS works just fine, thanks.

But the purpose of a rebrand is to excite potential new fans — to attract new blood and new eyes to the league. And, let’s face it, to people outside of our soccer community, “MLS” means one thing…

I just pumped MLS into a Google search. Eight of the top 10 hits were for house listings or real-estate advice. Pump “Toronto MLS” into a Google search and, voila, the top hit links you to realtor.ca. Try “Kansas City MLS” and, at least the first non-sponsored hit you get is Sporting Kansas City. But, after that, a ton of real-estate sites. If you’re looking for a home in Brooklyn, type in “New York MLS,” because a Brooklyn property site is the first thing that will come up.

This happened to me in Toronto: I had discussions where I would say “I cover MLS” and people thought I wrote about homes. Seriously.

But, it’s not just about brand confusion. There is something inherently awful about a league calling itself “Major League.” It helps build the mentality that North Americans must constantly apologize for our soccer, or worse, be insecure about it. Nothing turns off a potential MLS convert like a thin-skinned MLS devotee going off on Twitter or Facebook or on-air about how this league, c’mon, is good enough, really it is. By calling itself “Major League Soccer,” it’s as if the league has to remind us over and over that, yes we should consider it to big-league. And the cynic would argue it has the counterintuitive effect; if the league really has to call itself “Major League,” then maybe it isn’t.

Yes, someone will bring up Major League Baseball. That’s not a problem, is it? But that name reflects an old union between what had been two rival leagues; and it’s not like MLB has to distinguish itself in a tough global market. Baseball is a totally different animal than soccer.

A switch to something like North American Premier League (of course, the NASL has dibs on the simplest and best name of all: “North American Soccer League”), NA League 1 or SPONSOR NAME HERE League, well that would be radical. But it would also really say something about soccer’s place in North America. A new name without “Major” would show the world that the league does indeed have a new sense of confidence.

Yes, the adoption of a new name would take time. A wordmark would need to be registered in a variety of jurisdictions. Lots of hurdles would need to be cleared. But, I’m sorry, while it may have worked in the mid-‘90s, the term “Major League Soccer” in 2014 comes off as cartoonish. It feels like a league where Team Evil from Shaolin Soccer would play.