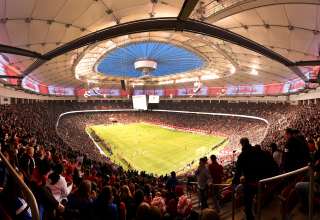 Life isn’t like a John Hughes film. In real life, the socially awkward guy who listens to Echo and the Bunnymen doesn’t end up with the most popular girl in high school. In real life, if the scrawny kid challenges the neighbourhood bully to a fight, he comes home with his own blood on his shirt and there’s fewer teeth in his mouth than he began the day with.

The Canadian men’s national team took on the CONCACAF neighbourhood bully on Friday night in front of 54,798 people at BC Place. And, despite a few early promising signs, the script played out about as predictably as an episode of MacGyver. The Mexicans beat Canada 3-0. Honestly, the scoreline could have been worse.

“Mexico’s superiority is really clear today, no?” said Canadian national-team coach Benito Floro after the match. “What matters in this moment is to analyze properly not only the result, but we need to extract as many positives, because the rest, the other team, at the moment is better than us, no?”

“I think we won this game with authority,” said Mexican coach Juan Carlos Osorio. “I thought we were better than the Canadian team. Nevertheless, we had some rough times during the game, but we found out how to control that, to win this particular match. I thought that our fullbacks fully controlled both of their best forwards, (Tosaint) Ricketts and (Junior) Hoilett. And the two centre backs did a very good job against Cyle Larin. And, on the other hand, our wingers basically created chaos every time we had the ball. So, at the end, with all the respect that we have for the Canadian national team, we thought we truly deserved this win.”

The Canadian soccer intelligentsia made the choice to put Mexico on the artificial turf surface at BC Place. But the plan backfired; the quick surface only exaggerated the visitors’ advantage when it came to speed on the wings and the pace at which they moved the ball. Really, the way to stop the Mexicans became clear — put them on a pasture. Or break their legs. Heck, Mexico looked so good on the fake stuff, maybe they should start ripping the grass out of Azteca.

“I’m not sure, but it could be,” Osorio said when asked if the turf actually helped Mexico. “The surface was good. At time I think they (Canada) also moved the ball very well. And, through (Atiba) Hutchinson, sometimes they seemed to reach a good sequence of passes — eight, six, eight, 10. But, for us, I think it was a very good surface to play on.”

The silver lining? El Salvador drew Honduras, 2-2. So Canada still holds onto second place in CONCACAF Group A. With three games left (one coming later this week in Mexico), Canada still controls its own destiny. Finish in the top two, and the Hex awaits.

But, when it comes to standing up to the best that CONCACAF has to offer, we saw a wide talent gap. Canada had no answer to the wonderful, inventive play of Mexican left back Miguel Layun, whose cross led to Javier Hernandez’s opening goal. Layun should have had a goal himself, if not for a sterling save from Canadian keeper Milan Borjan.

Canada didn’t have an answer for Mexican midfielder Hector Herrera, who also had a wonderful chance that was parried away by Borjan (to be fair, it has to be noted that the chance was created by an errant throw by the keeper). Herrera also hit the post after Hernandez hit the woodwork in a wild first-half sequence.

(Note how many times Milan Borjan’s name has already been used in this article.)

And Hirving Lozano, the 20-year-old wunderkind we’ve already seen scorch Canada at various youth levels, terrorized Canada down the right wing for the 60 minutes he was on the pitch. After a Canadian turnover in midfield, he raced past Canadian fullback Marcel de Jong and scalded a shot past Borjan to make it 2-0.

Canada had chances, too — Hutchinson had the ball taken off of him by Layun after lingering in the penalty area too long. Larin had a chance on a break, but his first heavy touch took him on a path away from goal and, by the time he recovered, he’d put himself at a bad angle and skied his shot. And Hoilett blasted a couple of shots well off target. Scott Arfield, making his Canada debut as a second-half dub, forced a save out of keeper Jesus Corona.

But, don’t let that previous paragraph fool you. Mexico was far more dangerous. Borjan was forced into excellent saves. The woodwork came to Canada’s rescue. Mexico could have had four or five by halftime and it would not have been unfair to Canada.

Doneil Henry, moved to right back position, was simply overmatched. De Jong, at left back, was overmatched. Dejan Jakovic and Adam Straith struggled with Hernandez — and also had difficulties getting the ball to the midfield. And when the midfielders did get it, the Mexican pressure was too much. Osorio was correct when he said his wingers — Jesus Corona and Lozano — created “chaos.” Mexico’s dominance in the wide areas was, well, crazy obvious.

Of course, questions will be asked on why Henry was moved from centre back to the right side. Floro said he didn’t have many options; he said that his back line corps are either not starting for their teams or are on teams who haven’t yet got into the swing of their seasons.

“Henry is, at the moment, on our team, can be chosen as either a centre back or a right back,” said Floro. “We have a lot of centre backs. But we don’t have enough fullbacks.” And Floro added he sees Henry as a right back “in the present or the future.”

In the 72nd minute, Corona had a chance to shoot, but then took the ball past a sliding Henry before rocketing a shot into the top corner to make it 3-0. It felt as if he needed to make the goal just that little bit more spectacular, just to prove a point. He could have taken it first time, but he didn’t. Like a cat that toys with the mouse — or the bully who dares the awkward goth kid to throw the first punch.

“I thought the second half was better, but probably more a result of them dropping off a little bit,” said Canadian midfielder Will Johnson. “As the game went, I think it got away from us a little bit.”

But Johnson said it wasn’t so much about Mexico being that good as it was Canada being that much off its game.