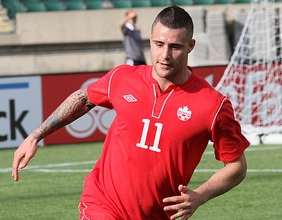 Colin Miller had to watch a dubious penalty get awarded just three days ago against Mexico in Seattle.

On Sunday his team could have, and perhaps should have, been awarded a penalty in the dying minutes that could have given a first win in 2013. Marcus Haber went down in the box under some clear contact but Canada just couldn’t catch a break in this entire tournament and ultimately bow out of the 2013 Gold Cup with one point taken from Sunday’s scoreless draw in Denver against Panama.

“Marcus Haber has said there was strong contact inside the box and I genuinely believe it’s a penalty kick. The big fella is very honest unlike the player on Thursday night,” Miller said in his post-game press conference, referring to Mexico’s Marco Fabian.

“He’s an honest player and he hasn’t done anything wrong. He’s been fouled inside the box, in my opinion, and I think it is a penalty kick and I said to the referee also after the game that I thought it was a penalty kick.”

Haber was unavailable for comment after the game. Only defender Marcel de Jong, who played in midfield on Sunday, was available to the media.

Three points were certainly on the table as Canada was up against a Panamanian side that was resting nine players from Thursday’s 1-0 win over Martinique. The Panamanians also needed just a single point to claim first place in Group A.

The chances were there as defender David Edgar nearly got onto a de Jong corner kick in the 28th minute. Unfortunately for him, it took a slight deflection at the decisive moment otherwise it would have been a simple header in.

Any chance created by Panama would come thanks to some Canadian errors. Ashtone Morgan’s poor clearances in the 18th and 48th minutes resulted in Panamanian scoring opportunities but in the first instance, Marcos Sanchez shot wide and in the latter, goalkeeper Milan Borjan made a fantastic diving save.

Progress has been made over the course of the three Gold Cup games but as has been like a broken record for Canadian soccer, scoring proved to be an impossible task.

“The problem that Canada has and you saw it again today is in the attacking third. We’re almost running out of ideas, if you like, when you get into the attacking third where other countries genuinely look dangerous,” Miller said. “The tournament is summed up at the end when there’s a very strong penalty claim if maybe he had a different jersey on it would have been a penalty kick.”

In the second half, Canada played all their cards, bringing in forwards Kyle Porter and Tosaint Ricketts, but the result leaves Miller without a win in six international games coached in 2013 as he hands over the reigns to new head coach Benito Floro.

Miller has guided the program through a turbulent period in the program where things were never going to be easy. But he’s handled the unfavourable results and trying times with the utmost grace and professionalism.

“I would not turn down, ever, the opportunity to coach our national team. It’s been an absolute privilege to work with the staff and the players,” said Miller, a member of the 1986 Canadian World Cup team. “Sure people will look at the results and go ‘it’s not what we would have wanted’ but in case of a rebuilding process we’re going to have to take some defeats and learn along the way. I’ve loved every minute. I think it’s an opportunity that almost too good to turn down to get to manage at this level to manage these players.”

There’s no denying the massive amount of work that needs to be done in developing players in Canada. Miller knows that and also is well aware of the face that just because Canada may be one of the most developed countries on the planet, that doesn’t mean success in soccer is a given.

“In Canada, and I think this is a general statement, I think we need to be more realistic in our expectations at the moment,” he said. “We have players that are playing across the world and MLS has been a fantastic vehicle for the United States in terms of their development. We have now got to try to push our Canadian players forward into the first teams of the MLS in order to give them this sort of opportunity and I think that the more we do that, the better off we will be.”