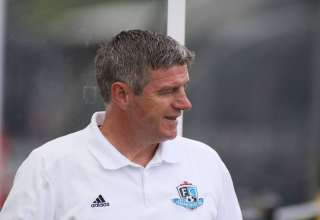 He has two new Northern Irish trialists in the fold — and FC Edmonton coach Colin Miller is putting his stamp on the club.

After his stint as the interim coach of the national side, Miller is back running training sessions for the Eddies. And while returning players don’t have to report to camp till Feb. 15, Miller had a message for the veterans who are already working out at the Commonwealth Fieldhouse: Everyone starts on a clean slate. Miller has made it clear that even established players like Shaun Saiko and Antonio Rago have to prove that they can make the squad – as players won’t be judged on their past bodies of work. They’ll be judged on how they perform at camp.

Basically, Miller has made it clear that he’s taken his arm and swatted every bit of history from the previous two NASL season off the table.

This should create a fascinating environment at camp — which at the moment includes former Linfield players Albert Watson and Daryl Fordyce. The pair are officially on trial with the Eddies, and the team will make a decision on whether or not to extend their stay by Friday.

As reported by The 11 earlier this year (CLICK HERE), the two quit Linfield to pursue new lives in Canada. FCE officials said that the pair contacted the club after they arrived in the country, wanting to give the NASL a shot.

Fordyce, a striker, and Watson, a central defender, both played for Linfield in Champions League qualifiers in 2012, so both have European experience, which could prove invaluable for a rebuilding Eddies’ squad.

The team is expected to release a full list of trialists on Thursday.