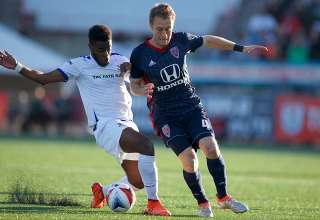 The Indy Eleven have not lost at home since September of 2015.

On Saturday, based on the balance of play, the Eddies deserved to end Indy’s home undefeated streak, but couldn’t find the necessary goal. FCE had to be satisfied with a 0-0 draw.

But, for an Eddies team playing its third game in seven days, there were plenty of encouraging signs ahead of Wednesday’s crucial Canadian Championship opening-round second leg at home to the Ottawa Fury.

The Eleven really only created one scoring chance of note, as Eddies keeper Chris Konopka earned his first NASL clean sheet. That chance came midway through the second half, when a volley from April’s NASL player of the month, Justin Braun, took a deflection off of Pape Diakite and forced Konopka to tip the ball over the bar.

Other than that, the Eleven, who have drawn every game they have played this season, didn’t get a sniff. The central defensive pairing of Adam Straith and Diakite were assured and remained connected through the night.

Veteran centre back Albert Watson did not play Saturday, as he was sent home to look after a thigh strain.

“We should have Albert back for Wednesday,” said FCE coach Colin Miller. “But Adam and Pape were so good together, they’ve given me a good headache for Wednesday.”

In the lead-up to Saturday’s game, the Eddies had to add yet another chapter to their unending novel of Planes, Trains, Automobiles and Alternate Forms of Transportation. After the first leg of their Canadian Championship series in Ottawa, the team flew to Toronto, where they found that their flight to Indianapolis had been cancelled. With no other air options, they got on the bus and made the journey, junior-hockey style.

“After Wednesday’s result, after our journey from hell, I asked the players to show their character,” said Miller. “And they showed that, in abundance. Hopefully, this will kickstart our season. It’s no secret that we haven’t had the start that we wanted.”

And Miller said that, if the Eddies can play as well Wednesday against Ottawa as they did Saturday against Indy, they can make up that one-goal deficit.

“We will have to treat Wednesday like a Cup final.”

The Eddies started off strong, as Diakite headed a free kick from Dustin Corea just over the bar.

With captain Nik Ledgerwood battling through a groin strain, he was only able to play 45 minutes; Sabri Khattab came in for the second half and put together his most impressive performance as an Eddie to date. Late in the second half, he dashed through Indy’s midfield and unleashed a vicious drive at goal that forced Indy keeper Jon Busch into a leaping stop.

Another run from Khattab late in the second forced a professional foul out of Indy’s Brad Ring. He got his second yellow of the night, and Indy was forced to ride out the last couple of minutes with 10 men.

Miller said that Khattab has said to him that he’s still getting used to the pace of the NASL, which is quicker than the lower divisions of Norwegian soccer from where he came. Miller said that he will continue to give Khattab shorter appearances till he gets up to the pace. Miller feels that once Khattab is used to the speedier pace, he will add a lot of the club.

Tomi Ameobi came on as a late sub, and he had a chance to grab a winner, as he deflected Dean Shiels’s shot just wide.

Miller also had a lot of praise for Canadian central midfielder Allan Zebie. The FCE Academy product had another strong game in the middle of the park.

“Every game, every training session, he just gets better and better,” said Miller. “The amount of ground he covers is fantastic.”