May 16, 2022
9 New Articles
Home CONCACAF Miller: GC Loss to Martinique “is a combination of a lot of different things going on for years in Canada” 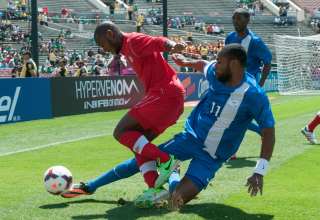 The incoming Canadian head coach Benito Floro, along with his son/assistant coach, was in attendance at Pasadena’s Rose Bowl on Sunday and one can only wonder what’s going through his mind after seeing his team outplayed and, thanks to a last-second wonder strike, beaten by tiny Martinique 1-0 in the Gold Cup curtain-raiser.

There’s some irony that with a young team on the field, Canada was undone on a goal from the oldest player on the field. Based on the celebration, Fabrice Reuperne will score no bigger goal in his career. At the same time, he pointed out the mountain that lies ahead in Canada’s rebuilding efforts.

“What happened today was not because of what happened over the last week to 10 days. This is a combination of a lot of different things going on for years in Canada,” interim head coach Colin Miller said in his post-game press conference. “This is a massive rebuilding process at the moment. It will be some time before we get to fix it.”

Goalkeeper Milan Borjan was the only player who came out to speak to the media and when said there wasn’t much being said in the locker room after the game as Canada hit another low-point in the program’s recent history.

The Martinique bench stormed the field after the goal and again a second time at the full-time whistle sounded just seconds after the goal. Canada, by contrast, looked less unified.

At one point in the second half, Julian de Guzman looked irate as he yelled at Nik Ledgerwood and Tosaint Ricketts and at the end of the game Borjan and Marcel de Jong exchanged words that didn’t look to be too kind.

“There’s nothing. There’s no talk,” said Borjan of the atmosphere in the locker room after the game. “We’ve got to pick our heads up and go into the next two games and try to win and do our best.”

“We had an OK game defensively. I think we played really good but offensively again we didn’t score a goal and you need, in this tournament, to score some goals.”

It was a promising start playing against a Martinique team that had a definite size advantage. Marcus Haber and Doneil Henry had chances off corner kicks in the first 15 minutes but after one was saved and the other went wide, Canada was suddenly overrun with wave after wave of Martinique attack.

Borjan was his own worst enemy in the first half, choosing to punch a pair of crosses that he really should have caught and got off the hook thanks to Martinique’s poor finishing.

But he saved the game early in the second half with a pair of fine saves and there was nothing he could do with winning goal.

Canada wasn’t done any favours when Johnson had to be taken off not long after the half. He came into the game battling some unknown stomach problem and was given fluids intravenously after the game.

If Canada has any hope of salvaging some kind of pride and good momentum from this tournament, it’ll need him to recover in time to see action at some point in the tournament.

“We’re clearly devastated by giving away the late goal but Thursday night in Seattle we will have a lot more Canadian fans in the crowd and I’m hoping that I get a little bit more chance now to work with the team,” said Miller. “I’m not expecting miracles by any stretch but I think that for spells we did well this afternoon in possession without being too penetrating if you like. But we have to be better against Mexico.”