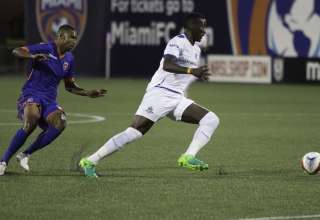 Last season, the Eddies gave up just 21 goals in 32 games. Their keeper in 2016, Matt VanOekel, set an NASL record for clean sheets in a season.

Now five games into the NASL season, and the Eddies have yet to post a clean sheet.

On Saturday, they lost 2-0 on the road to Miami FC; but, on top of the goals, the hosts hit the woodwork twice, and Eddies’ keeper Chris Konopka made a great save to deny Ariel Martinez, who was in alone on goal late in the second half.

Yes, Eddie Sainey Nyassi came close to scoring, with a shot/cross attempt that slid across the top of Miami’s crossbar late in the second half.

Eddies coach Colin Miller said that, just five games into the season, that it’s too early to panic. He said he knows the Eddies have given up some goals this season where players haven’t tracked runners, or because they were in possession but gave the ball up cheaply. He thinks these are the sorts of mistakes that can be eliminated from the game.

But he also warned that the Eddies’ defensive records from last season were so unusual, that it’s unfair to set them as standards going forward.

“We had a great run last season,” said Miller. “But, if you look at leagues around the world, it’s rare for a team to do something like we did last year. I don’t get carried away by our defensive record from last season.”

He said that the fans would “need to cut the players some slack.” He said it was difficult for Edmonton, who have been training outside in temperatures around the freezing mark, to come to Miami and then adjust to steamy conditions. Because of what Miller called the “heavy” conditions, he decided not to risk captain Nik Ledgerwood, who has been limited this week by a groin strain.

Midfielder Dean Shiels didn’t start, and Nyassi came on as a sub. Miller had to make some tough squad decision as the Eddies visit Ottawa in midweek for the first leg of their Voyageurs Cup opener. It will be the first it-count meeting between an NASL side and USL club since the USL got onto equal footing with NASL, getting Div-2 status, over the winter.

Michael Lahoud sent a warning sign early in the game when his shot from outside the box hit the frame of FCE’s goal. But, six minutes before halftime, Miami grabbed the lead on a goal from Kwadwo Poku. The play began with midfielder Richie Ryan sliding the ball to Poku, who then played a quick give-and-go with Vincenzo Rennella before beating Konopka.

Miami made it two-nil in the second half. Dylan Mares, who was consistently a thorn in FC Edmonton’s collective side in his time with the Indy Eleven, set striker Stefano Pinho free with a clever through ball. Pinho tucked the shot in the far corner.

Martinez, who scored two fantastic goals against the Eddies last season, lashed a shot just wide and later struck the post, before finally being stoned by Konopka late in the game. Martinez’s finishing wasn’t cool or collected — but it didn’t need to be.