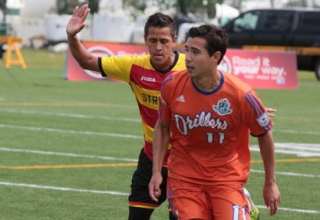 On Friday, soon-to-be-former FC Edmonton midfielder Matt Lam issued a statement to The 11, regarding his suspension which has seen him spend the last month of the season getting paid to stay at home.

At the end of August, the team confirmed that Lam had been suspended for one game, the Labour Day match against Atlanta, for “disciplinary reasons.” The team later confirmed that Lam would not return this season, as he was not welcome at FCE matches or training sessions.

Lam was FCE’s local star in its 2010 campaign, where it played a series of friendlies ahead of its 2011 entry into NASL. But, in 2011, Lam was loaned out to Japanese side JEF United. He endured shoulder trouble during his time in Japan that limited his playing time under former FCE coaches Dwight Lodeweges and Hans Schrijver.

Big things were expected in 2012; but Lam saw his playing time dwindle as the season went on.

Below is Lam’s statement, in its entirety.

“With regards to the incident, while it has been really tempting for me to come out and talk about the details to defend myself, as I do feel like I was pretty mistreated and that my name is unfairly being dragged through the mud in my own hometown, I have no desire to throw anyone from the club under the bus or to waste any more of anyone’s time or energy on the various ‘disciplinary incidents’ this team has seen this year.

“I think that what I can say is that there isn’t anyone on the team who isn’t more disappointed with how the season went for the team, and for myself, than I am. I had a great experience during the 2010 exhibition season, and another amazing experience during my year playing in Japan. I came home, excited to play in front of my family and hoping to bring back with me a good year of training and playing at a higher level to help contribute to the successful season that I think this team should have had. It was incredibly frustrating for me to look around the dressing room and see a lineup that, at least in my mind, could have easily been one of the most talented in the league yet continued to lack results and fail to produce the kind of soccer I think the fans should have been seeing.

“Regardless, I wish nothing but the absolute best for this club and especially my teammates. This is my hometown and some of my best friends, new and old, play on this team and I really hope this team finds its feet next season and in the next years to come. Lastly, I think the fans, and especially the Edmonton Supporters Group, deserve a pretty big thank you. I know I speak for the entire team when I say the support you continue to show the team, despite our results this season and a few setbacks with the stadium, is second to none and has not gone unnoticed by the players.

“As for what’s next for me, I am scheduled to get the shoulder surgery I put off to play this season in October. I’m just looking to get myself back to 100 per cent over November and December so I can be ready to consider my options in January.”