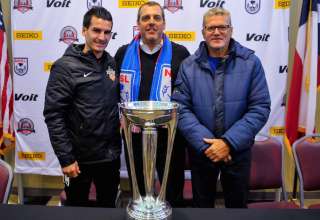 In the midst of the 2013 season, Surrey, B.C. native Alen Marcina was asked to take over the San Antonio Scorpions on an interim basis. The team was in the NASL basement at the time. But, Marcina did well enough with what he had to convince the Scorpions brass that he deserved to have the interim tag removed.

Now, Marcina can add “Soccer Bowl” to his coaching résumé. Two superb goals — a bicycle kick from Rafa Castillo and a great run and finish by Billy Forbes — gave the Scorpions a 2-1 win Saturday night in the NASL Championship game.

It caps off what has to be termed as a very good year for Canadians in the NASL.

Of the 10 NASL teams, three were coached by Canadians. One won a title. Another, Colin Miller, received a three-year extension from his club, FC Edmonton. A Canadian, John Smits, won the Golden Glove award, which goes to the keeper with the lowest goals-against average in the league — with enough minutes played to qualify. A Canadian team, the Ottawa Fury, set a modern-day NASL attendance record in its TD Place opener. FCE’s Hanson Boakai got an invite to a senior national-team — at the age of 17.

Oh, and three members of FCE, Boakai, Sadi Jalali and Marko Aleksic, are part of the Canadian U-20 squad that went to England and got a 2-2 draw and then beat Russia’s U-21s by a 2-1 count.

Maybe the only spoiler was that Adrian Cann, the Scorpions’ Canadian captain, wasn’t able to play in the championship game due to a knee injury. As Cann told us in the fall (current) issue of Plastic Pitch, Marcina asked him to come to San Antonio. Marcina and Cann played together with the Whitecaps and, after taking a year away from soccer, Cann decided the Scorpions were the right fit.

“I thought it would be a great fit for me to go down there, to re-establish myself, playing wise, and eventually win a championship. It was appealing to me.”

Cann certainly had the “winning a championship” part right.

Within a year, Marcina has gone from a great coaching unknown to being seen as one of the best in NASL. And, while San Antonio certainly brought it a number of high-profile players this season, the cynics felt that the large number of egos and bad eggs on the team would be hard to manage. Instead, Marcina showed that he was right when he told us that “a lot of these guys have been misinterpreted. They are still winners. They want to win. I knew, collectively, if we all came together and stayed focused on our goals, we’d experience some success.”

In the future, if we’re talking about MLS coaching vacancies, Marcina should be part of discussions. And he’s certainly become one of the brightest stories in Canadian soccer.