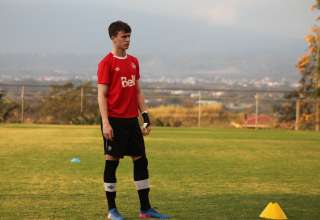 There was no way that Canada’s men’s under-20 team was going to qualify for a first World Cup in a decade in its first game, but, after a 1-0 loss to Honduras on Friday night, the drought looks set to continue.

Jorge Alvarez scored in the 77th minute to give Honduras the leg up in what will likely be the race for second place in Group A behind Mexico at the 2017 CONCACAF U-20 Championship.

“I wouldn’t say it was a deceptive result but it wasn’t satisfying because we had chances to score and it was an error in fatigue on the goal,” said centre back and captain Thomas Meilleur-Giguère. “They got the ball into the box and it came out and there was nobody there (to mark). It was a good goal. We’re to blame, it wasn’t on them.”

The result leaves Canada with a mountain to climb since games ahead are against powerhouses from Mexico and minnows Antigua and Barbuda. Canada should beat Antigua but barring any bizarre results, they’ll also have to pick up three points against Mexico.

Given the recent history between Canada and Honduras and the latter’s role as Canada’s bogey team, it was an encouraging first half performance for Canada in Costa Rica.

There was good passing, a few quality scoring chances but as has become the refrain of the Canadian men’s program, the chances went begging.

Just past the half hour mark, Gabriel Boakye took a nice run from his left back position and crossed into the Tristan Borges, who was influential in the first half. Borges’ first touch wasn’t ideal and his shot missed wide.

“If you don’t take your chances, you’re always liable to get punished at some stage,” said head coach Rob Gale. “Unfortunately, there wasn’t much time left on the clock (after Honduras scored) and we were worried about a couple of legs. That’s football.”

The conditions were favourable for the Canadians as wind buffeted the Estadio Ricardo Saprissa and plenty of cloud and rain in the area kept things very comfortable. The rain stayed away but for once, the Canadians had favourable conditions in the part of the world where Canadian teams traditionally struggle but despite that, the outcome was very similar.

It didn’t muster much in the second half but seconds after conceding, Canada fashioned its only true opportunity of the second half with a shot from Liam Millar that was similar to what gave Honduras the lead.

The only difference was a fine diving save from Javier Delgado pushed the ball around his right post to concede a corner that Canada couldn’t convert.

“They’ve worked their socks off and tried to execute. They just lost their way a little bit and ended up conceding a couple of chances,” said Gale. “But I can’t fault a young group and they’ve worked their legs off as best they can here and we knew it was going to be a game of a goal, and we didn’t take our chances. Congratulations to Honduras. They did.”

Canada now must get a result against Mexico, something it hasn’t done at this tournament since 2009 in Trinidad and Tobago when Canada won 2-0 as Mexico crashed out in the group stage.

The shaky second half where Canada gave away possession in dangerous positions too often is a worrying thought against a team like Mexico that is certainly much more clinical than Honduras.

While many outside the team’s environment will now effectively write off Canada, it’s important for the players to maintain that small hope that they can pull off the improbable.

Canada plays Mexico on Monday and Antigua and Barbuda next Thursday.

It hasn’t qualified for a U-20 World Cup since hosting the 2007 edition of the competition.