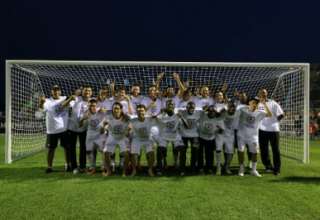 The Atlanta Silverbacks now have the better part of four months to promote and sell tickets for the Soccer Bowl.

The Silverbacks — who, two weeks ago, looked unlikely to take the crown — wrapped up the title on American Independence Day. And that now allows us to take pause and evaluate the North American Soccer League’s first-ever spring season.

When the new format was announced, the reception from FC Edmonton’s fanbase was lukewarm at best. And, earlier this year, coach Colin Miller went on the record, stating he prefers a single season-and-playoff system. But he also made it clear that he didn’t speak for FC Edmonton’s organization as a whole.

In fact, even with 11 teams slated to start the season in 2014 (12 if you believe that a Calgary bid can still be expressed into NASL post-flood, 13 if Calgary is in and the Puerto Rico Islanders somehow miraculously rise from the ashes) and many more cities rumoured to be expansion-ready (including Winnipeg and a southern Ontario team), the split-season format doesn’t look to be going away any time soon. In fact, NASL commissioner Bill Peterson has repeatedly expressed that he and the owners continue to back the spring/fall season format — with the winner of the spring hosting the winner of the fall season in the Soccer Bowl — no matter how many teams the league has two or three years down the road.

What could change that? Nothing at the moment. But it would have to be the chance at nationally televised playoff broadcasts. It’s easier for NASL to market a single Soccer Bowl, a one-game package where the home team has months to sell tickets, instead of playoff series, where second-division teams often have less than a week each to sell and market the games. Even in mighty MLS, we have seen early-round matches in Colorado and Dallas plagued by poor gates — and that’s simply because the teams don’t have enough time to sell the games.

Without TV deals, second-division playoff matches are money-losers. And what an owner doesn’t want is regular-season success as a reason to lose money/more money.

A Soccer Bowl is much easier game to sell ticket-wise. You only have to worry about travel costs for one team. And, from July 4 on, everyone knew the game is in Atlanta. You get a compromise between the new MLS system, where the team with the best record gets to host MLS Cup, and an awarded-city system, where media can book tickets and hotels well ahead of schedule.

That’s the one flaw with the current MLS system. Since we don’t know where the game is going to be until just a couple of weeks before kickoff, it forces us to scramble for tickets, hotel and flights (or freelance writers) in the host city. Last-second bookings tend to be more expensive than advance bookings, especially when going to major cities. For first-division soccer, some of us can make those financial sacrifices.??That wouldn’t be the case for second-division soccer. But, media covering NASL, they know Atlanta earned the right to host a game, so we can also book well ahead of time, which makes covering the game more cost-effective.

When the NASL first announced the system, the fan in me wanted to see the team with the best record, spring or fall, get to host the game. But then the business-owner side of me stepped in and told the sports-fan side to have a seat. This system actually offers a compromise — the chance to have months to sell tickets, and fans/media planning on going to the game can take advantage of cheaper advance fares.

Now, let’s get back to the greatest criticism of the NASL system — that, in North America, interest will be lost when teams get eliminated early from the first-place race.

Two weekends ago, four of the seven teams — more than 50 per cent — were still alive. That speaks to the parity of NASL. And, take FC Edmonton, for example. Five of its 12 spring season matches were draws, and it finished seven points out of first. If the team finds three goals, to turn three of those draws into wins, then the Eddies are right there on the final weekend.

So, even as the league expands, because soccer’s talent pool is so huge, and a team can fill holes awfully quickly, we can expect to see 11 or 12 or 13 teams that aren’t that far apart. The pattern for success in this league is simple: Dominate at home and squeeze a few draws out of the road schedule. Until some teams find consistent ways to win on the road, no one will ever run away and hide in a title race.

And FC Edmonton, despite being eliminated three weeks ago, still ended up having a major influence in the race. Two weekends ago, the Eddies knocked Minnesota United FC out of the race with a 3-1 win at home. (Big-spending MUFC, who honestly didn’t look emotionally ready for a do-or-die game, and didn’t respond after giving up two early goals, are clearly the winner when it comes to NASL’s most disappointing team.)

That meant that MUFC had nothing to play for when it faced Atlanta on U.S. Independence Day. It needs to be noted that more than 6,500 fans still showed in Blaine, Minn. to see their team try to play the role of spoiler. Instead, the 3-0 win by Atlanta, fuelled by goals from Brian Stisser, Bobby Reiss and Ruben Luna, only will add to the questions about MUFC’s character, or lack of it.

Atlanta got the title — and to Canadian fans, it will seem a little ironic. That’s because, of any team FC Edmonton saw in the spring season, Atlanta looked the least like a championship contender. The Silverbacks were blown out 3-0 by the Eddies at Clarke Stadium. And, when FCE went on the road to Atlanta, the Silverbacks spent two-thirds of the game up a man, but allowed the Eddies to get a 1-1 draw. And, in fact, the Eddies had several great chances to win the game late — if not for Atlanta keeper Eric Ati, who made huge stops on Massimo Mirabelli, Albert Watson and Daryl Fordyce, the Silverbacks would not have got that point.

And, that point proved to be huge — it was their margin over Carolina and San Antonio. And that’s the best point about the short spring and fall seasons. Every game will have influence on the title race. For Atlanta, that draw with Edmonton, preserved by Ati’s saves, was every bit as big as the win over Minnesota.