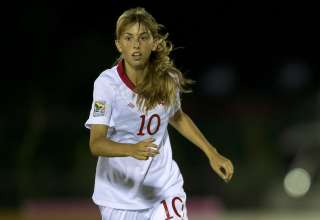 Without coming off too much like bad high-school newspaper journalism (“they did their best, but, despite their best efforts, came up short”), it’s difficult to assess Canada’s 3-2 loss to Venezuela at the quarter-final stage of the U-17 Women’s World Cup in Costa Rica.

Canada’s most glaring problems came in the centre of the defence, where the team was punished regularly for its high line, and not being able to cope with the physical presence of Venezuelan striker Gabriela Garcia. But, we have to remember that these are girls who would are at the Grade 11 age (or maybe even less). We have to remember that defensive awareness comes at a later age than other soccer skills.

So, really, where Canada struggled on Thursday — controlling the speedy Veneuzuelan counterattack — can easily be chalked up to the inexperience of youth.

And, while it’s difficult to go out the U-17 Women’s World Cup, at least it’s better to lose 3-2 — and show some real positive offensive glimpses — than go out to one of those oh-so-Canadian 1-0 or 2-0 defeats, where the commentators will say that we showed great heart but couldn’t create many chances.

So, let’s look at the very good from the match: The play of forward Marie Levasseur. After Canada went down early to a goal from Deyna Castellanos, Levasseur made a wonderful run down the right side and squared a perfect ball for Sarah Kinzner to slot home for the equalizer.

Levasseur’s 40th-minute goal, which gave Canada a short-lived 2-1 lead, was a marvellous piece of skill. She got past the backline, but her run into the box was taking her away from the goal. Still, even as her angle towards goal got worse with every step she took, she was able to swivel and direct a low shot just inside the far post. It’s these kind of moments that can’t be taught. And, with four goals in the tournament, despite missing time to injury, Levasseur has made it clear that she belongs on the squad for the upcoming U-20 World Cup. You simply can’t ignore natural goal-scorers.

But, coach Bev Priestman employed a risky strategy; she had her defenders push up the field, depending on keeper Rylee Foster to act as a sweeper. Foster came out of her goal time and time again to intercept hopeful passes.

Too often, though, Canada didn’t have the needed discipline (again, these are unpaid teenagers, so let’s not be too tough) to make it work. When Venezuela got their tying goal just before halftime, Yosneidy Zambrano and several of her teammates got behind the backline. It was a devastating, quick counterattack; Zambrano had so much time, she could wait for Foster to make the first move, then smash a shot past the Canadian keeper.

The high-line gamble continued into the second half. Maybe if Bianca St-Georges, sent off in the quarter-final clinching win over Ghana, had been available, things might have been different. But the size and speed of the Venezuelan forwards ground down the Canadians; it was like watching a big football running back wear down a defence with smashmouth effort after smash mouth effort.

For the winner, Garcia brushed (the much smaller) defender Easther Maya Kith aside before beating Foster at the near post. And Venezuela had the chances to pile on the misery, but Foster made several big stops down the stretch, as we watched what was a close game clearly split into a match between a bigger and stronger team and one that struggled to keep that pace and discipline for 90 minutes,

Still, it’s nice to not be the team that shows a lot of heart and can’t threaten the opposition.