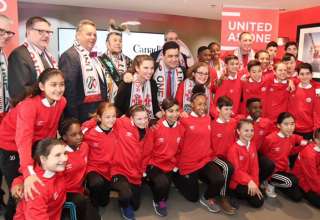 The bid books from the World Cup-hosting hopefuls are due March 16.

So, Tuesday was the perfect time to stage an event that helps serve as a Band-Aid for two groups who have been bleeding support. Minister of Sport and Persons With Disabilities Kirsty Duncan was at Toronto’s BMO Field Tuesday morning to announce that the federal government is giving its official support to Canada Soccer’s efforts to host World Cup matches in 2026.

At the moment, the United bid calls for Canada and Mexico to host 10 games each, while the United States would host 60. Four Canadian cities — Toronto, Montreal, Edmonton and Vancouver — are shortlisted to host matches. If the United bid is successful, the decision on where to host games ultimately rests with FIFA, though Vancouver City Council documents indicated that at least one Western and one Eastern city would be selected.

No financial details about the feds’ support were announced. But, as the four Canadian potential host cities approved their continuing participation in the bid, they all stated that they would need support from various levels of government to make it work. The assumption was that the feds would commit to a significant level of funding.

Yes, the CONCACAF bid comes off as being economically sound because it will utilize existing stadiums. It should “only” cost millions, not billions, to host. But, there’s no such thing as an international sporting event on the cheap. Grass has got to go into the stadiums, some will need renovation work or, in the case of BMO Field, expanded seating capacities. There will be security costs. Transportation infrastructure. Welcoming committees.

For the United bid, some kind of news that doesn’t come from the United States is welcome, as the America-first tack that had been taken by the bid (until last week) has worked more as an anchor than as a sail.

ESPN reported last week that Morocco’s bid for the World Cup is coming on strong, while the United bid between Canada, Mexico and the United States might not have the support it had hoped for.

Really, we should have seen it coming. Why? The voting process has changed. No longer does a small, easy-to-influence executive committee select the World Cup host. This time around, each FIFA confederation gets a vote. The one confederation, one vote system is more open, but it also shifts the balance of power. South America carries very few votes, but Africa has a little more than a quarter of all the voting members. So, Morocco has some built-in advantages that come out of the new system. Add to the African votes the support we know will come from the Middle East and from other nations who don’t have good relationships with America, and you can actually see the road map to a Moroccan win.

Morocco had the advantages of Donald Trump not being its president. As well, it didn’t have Sunil Gulati at the helm of its bid; the former U.S. Soccer president was replaced last week as the leader of the United effort to host the World Cup. Gulati was seen as a key part of the U.S.-led housecleaning effort that deposed the former Sepp Blatter regime; but Blatter, despite his suspension from FIFA for corruption, remains a popular figure with many of the confederations. Those small nations saw him as their champion, he got tournaments to places that normally don’t get tournaments, and Blatter continually thumbed his nose at the UEFA’s power brokers.

What was frustrating was how long it took the United bid to recognize that.

There will be those who say “but Trump won’t be president of the United States in 2026,” but all that matters is that he, unless he’s removed from office in the next couple of months, WILL be president when the confederations vote. And that matters a lot more than who will be president in 2026. Heck, a FIFA confederation would be absolutely right to think “maybe the next president will actually be even more extreme — heck, those people already elected Trump, right?”

So, Canada’s announcement was desperately needed; but it’s also required in Ottawa, as well. Polls are showing that the honeymoon between Prime Minister Justin Trudeau and the Canadian public is, well, over. The photo ops that used to charm us so much now make us roll our eyes and grit our teeth. Pipelines and business taxes have been divisive issues for the governing Liberal Party. And then there was that disastrous trip to India, which made our prime minister an international laughingstock.

So, the Liberals, who have been awfully slow to throw their support behind the bid (the bid book is due this week, after all) needed some kind of show of strength. And the support for the World Cup is a political win. It might, in the long run, be a small political win, but maybe it’s something to stop the bleeding.

Right now, the Liberals and the United World Cup bid need each other. The bid ne