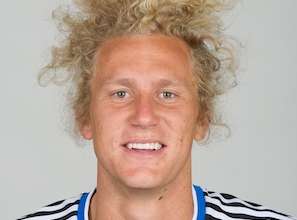 Steven Lenhart is the MLS Player of the Week.

In a weekend that was filled with braces (heck, Houston had two players on two-goal games, Camilo scored two as a substitute for Vancouver), Lenhart’s two-goal effort was the one that stood out in the minds of the North American Soccer Reporters. He got the most first-place votes out of the NASR members.

Lenhart’s two goals were the margin as the San Jose Earthquakes upset Real Salt Lake 2-1 Rio Tinto Stadium. The altitude didn’t keep Lenhart from being able to judge crosses, which sail further in the rarified air. He headed home two goals just four minutes apart to keep the Earthquakes’ playoff hopes alive. The Earthquakes are four points out of the playoffs, and have just four matches left on the schedule.

How The 11 voted: In a week filled with goals, we went with a defender. The Player of the Week rarely recognizes the exploits of a defender who does yeoman’s work in the back — even though their work is just as much a contributor to results as the endeavours of the forwards.

Camilo may have scored twice in Vancouver’s 3-0 win over Montreal, but his markers came late. For most of the 90 minutes, it was a tense 1-0 affair. And who did more to help preserve that 1-0 lead than anyone else on the pitch? Defender Carlyle Mitchell. The Trinidad and Tobago native played one of his finest games of his professional career Saturday. He consistently cut off passes got to balls in the air. On the offensive end, he headed a ball off the bar. And he did well playing the ball out of the back.

Mitchell spent the first half of the season at FC Edmonton, where he played every minute of every NASL game until he got his foot caught in a seam on the Clarke Stadium turf and missed a few weeks. The Whitecaps recalled him, and FC Edmonton had been expecting Mitchell to come back once the Whitecaps’ injury woes subsided. But those hopes are fading. Mitchell’s game has really matured, and he showed Whitecaps’ supporters just how good he can be in the 3-0 win. It was a huge effort in a game that meant a lot to the Whitecaps’ playoff hopes, keeping them within shouting distance of fifth place.

And, to me (and, I think, a lot of Canadian soccer supporters) a Montreal-Vancouver game has a real sense of occasion. I still see it as the most heated rivalry out of the Canadian MLS teams. The years of animosity the Whitecaps and Impact have built through second-division soccer and Canadian cup games have not been forgotten. While MLS has (unintentionally) watered down one of the best rivalries in North American soccer by creating an East-West conference schedule that has the Impact and Whitecaps meet just once a year, there was an unmistakable buzz to this Saturday’s game. And, dare I say it, it’s a different kind of buzz than the Whitecaps have for Cascadia matches. For purely Canadian interests, an Impact-Whitecaps match is still more meaningful, more tinged with bad blood, than a Timbers-Whitecaps or Sounders-Whitecaps match. If, in 2014, MLS scheduled Impact-Whitecaps in its Rivalry Week rather than TFC-Impact, we’d nod in agreement, wouldn’t we?