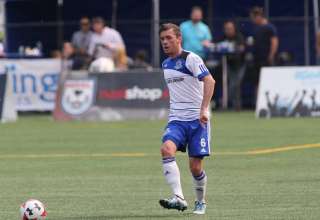 “Dad.” He and his wife welcomed their son, Miles, into the world a little more than two weeks ago.

So, to say that this has been a season of change for the Alberta-born Canadian national-team veteran would be understatement. He’s going through the rigours of preseason training with the Eddies, while going through the same sleep patterns that most new parents have to endure — that is, little or no sleep.

“Not much sleep, it doesn’t help during preseason, but everything’s been going good.” he said. “The physio has been helping keeping my body in good shape.”

But, emotionally, fatherhood and the armband are giving him major boosts.

“It gives you another kind of energy, that you didn’t have before, being a father,” said Ledgerwood. “Also, being a captain of a team in the province that I grew up in. It gives you a little bit more energy to go out there and do better things.”

Centre back Albert Watson had captain of the Eddies since the 2013 season. Coach Colin Miller said that giving Ledgerwood the armband allows the veteran Watson the chance to focus more on his football.

“The gaffer had a few talks with me just before the season started,” said Ledgerwood.  “So, it wasn’t a complete surprise. Everybody knew that Albert had done a great job the last four years, that this is a decision the club has made. I’m definitely honoured to take that new role and help the club progress.”