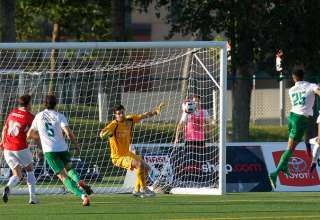 There are many instances where a team gives up a goal, and points to all the things the defenders or keeper could have done better. A missed marking assignment, a poor clearing attempt, a lagging fullback who kept the opposing team onside.

But, sometimes, you are beaten by a moment of sheer brilliance. And all you can do is shrug.

That’s what happened to FC Edmonton Friday night at Clarke Stadium. After taking a 1-0 lead through a Daryl Fordyce marker just before the stroke of halftime, the Eddies had to settle for a 1-1 draw thanks to a fantastic goal from Emmanuel Ledesma.

“I’ll take a point against the New York Cosmos any day,” said Eddies coach Colin Miller. “Especially the way they played in the second half.”

Miller said he felt the draw was a “fair result,” with his side edging the play in the first half, with the Cosmos controlling the action in the second.

The Eddies did a lot of first-half attacking using the most direct route of all, the powerful right leg of keeper Tyson Farago. With goal kick after goal kick, Farago launched 80-yard bombs down the throats of Cosmos central defenders Dejan Jakovic and Darrius Barnes. Neither defender looked particularly comfortable dealing with these direct attacks; time after time, striker Tomi Ameobi either won the ball or got behind the back line. He forced keeper Jimmy Maurer into a good save early in the first half, put a shot wide after he outduelled Jakovic to a long ball, then put a shot off the post on another long ball that got behind the defenders.

And, Maurer saved himself some blushes with some good, improvised defensive play. The Cosmos keeper came well out his goal — nearly to half — to play a ball, but had his pocket picked by FCE’s Dustin Corea. The FCE winger streaked towards the wide open goal, but Maurer got on his horse and matched Corea stride for stride, never allowing his quarry a clear look at the net.

But, just before halftime, the Eddies’ pressure paid off. Ben Fisk crossed the ball in for Ameobi, who cushioned a header for Fordyce to bang into the wide open goal. It was Fordyce’s first goal for the Eddies since re-signing with the club after spending the spring with FC Cincinnati of the USL.

Cosmos coach Giovanni Savarese said at halftime that his team needed to do better dealing with the Eddies direct attack, and his players also needed to play the ball more quickly. The Cosmos heeded his advice, and controlled possession through the second half. Eugene Starikov sent a warning shot the Eddies way, but Farago denied the Cosmos sub with a good, diving save.

However, in the 65th minute, Farago had absolutely no chance to get to Ledesma’s cannon.

Ameobi said that the Eddies would look back at some of the chances they missed in the first half; he felt that his side should have been ahead by more than a single goal at the break.

“I missed a couple of chances myself that I should have finished,” he said.