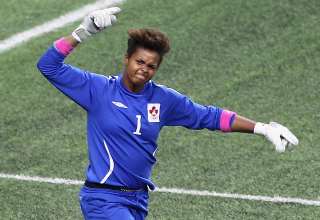 The two veterans of the Canadian women’s national team were the heroes of a gold-medal performance at the Pan Am Games.

Canada beat Brazil 4-3 in penalties to capture the gold medal after the two teams played to a 1-1 draw in regulation. For the fans of the national program, winning Pan Am gold is small consolation after the team imploded at the World Cup in Germany. But, looking forward to Olympic qualifying in 2012 — where Canada misses both the United States and Mexico in the group stage — the Pan Am win is a boost for the team and for new coach John Herdman.

Yes, winning the Pan Am Games without the United States is a little hollow — but, considering where the team was just two months ago, it’s a solid step forward.

Canada and Brazil played to a 0-0 draw in the group stage, but Herdman rotated the squad as the Canadians had already qualified for the semis and needed to ensure that some of the star players got some rest. So, that game couldn’t provide any kind of road map for the final.

The Marta-less Brazilians got off to a dream start, with Debora beating LeBlanc just four minutes in. For 83 agonizing minutes, that 1-0 scoreline held until — who else — Sinclair rescued the game with an 87th minute marker. Sinclair rose and headed home a corner from Diana Matheson.

After extra time settled nothing, the game went to kicks — and Matheson, Sinclair, Melanie Booth (a shock omission from the World Cup roster) and Sophie Schmidt all scored on their penalties. LeBlanc stopped Grazielle, which allowed Canada to go into its first kick of the game with a 4-3 lead. Candace Chapman strode to the spot, knowing that the game would be over if she converted her kick. But she smacked her shot off the post — setting up Debora, the opening goal scorer, with a chance to tie the game. But LeBlanc made her second save, and Canada got the gold.