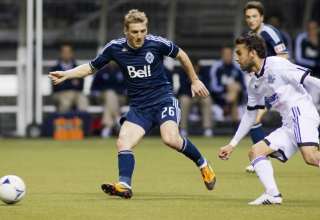 For 75 minutes of Wednesday’s second leg of the club’s Amway Canadian Championship final against the Vancouver Whitecaps, things looked good for FC Edmonton to be Cinderella at the BC Place ball.

The Eddies had a 1-0 leading, halving the 2-0 deficit from the first leg at Commonwealth Stadium. The soccer gods looked to be smiling on them, as an early goal from Whitecap Michael Nanchoff was incorrectly ruled out for offside — as replays showed that the low cross from John Thorrington was played when Vancouver’s attackers were all in onside positions. And, the Eddies had created the bulk of the chances, getting the first-ever North American professional goal from Chilean Yashir Pinto, and forcing Caps keeper Brad Knighton to make a few excellent saves, including a point-blank chance from Michael Cox.

But, with the Eddies needing just one goal to improbably send the tie crashing towards extra time, FC Edmonton crashed itself.

It all came undone in the 75th minute, when substitute Sebastian Le Toux turned left back Fabian Vorbe inside out then stroked a low shot towards the middle of the goal that went right under keeper David Monsalve.

It was a deflating moment that sent a Div.-2 side crashing down — and the Whitecaps scored twice more against the shellshocked Eddies to take the game, 3-1, and the series, 5-1.

“I think for the first 75 we felt fantastic, we felt we were taking it to them,” said FCE attacker Matt Lam, who forced an excellent save out of Knighton late in the first half when he found himself in a dead zone amidst four Whitecaps defender and smacked a shot towards the inside of the post.

“But, after the goal we got deflated. It was a bit of a defensive mix-up and, from then on, we knew it was going to be an uphill battle.”

Vorbe, who was turned inside out by Le Toux, was in the game because defender Fabrice Lassonde was left home because of injury and Adam West, who played Sunday against Carolina, is still coming back from a hamstring problem.

And for Monsalve, it marked the second time in two games that a low roller of shot went right underneath him. Last week, it was Eric Hassli’s opening goal.

Holding a two-goal lead, and with a game on the Atlantic coast on Saturday against the New England Revolution, Whitecaps coach Martin Rennie left most of his regulars on the bench or in street clothes, with midfielders Davide Chiumiento, Camilo, Eric Hassli and defender Jay DeMerit being the name players in the XI.

But FCE coach Harry Sinkgraven, coming off a win Sunday and then a game in Atlanta on Saturday, also mixed up his squad. Midfielders Dominic Oppong and Ilja Van Leerdam didn’t start. And forward Kyle Porter was left on the bench in favour of the younger, and taller Michael Cox.

Cox proved to be a nuisance to the Whitecaps throughout the first half, playing a physical game.

But it was the Whitecaps who should have been up 1-0 after just three minutes. Thorrington played a low ball into the area that FCE’s defenders were slow to react to, and Nanchoff slid and bundled it across the line. But, mysteriously, the play was called offside.

Whether it was the relief of not conceding, or the nothing-to-lose mentality, FCE played the rest of the first half far more professionally and composed than it did any of the first leg.

“It (confidence) played a huge part,” said Lam. “After the home result, everyone was disappointed. We thought we had nothing to lose. We wanted to take a lot of pride and show people what we could do. And after we scored, we really started to scare them.”

In the 19th minute, Pinto cut the ball back for Cox in the middle of the box. But Knighton came out and was able to get his hands to the point-blank shot.

Lam, again, was very effective, regularly moving the ball up the pitch and taking speculative shots at Knighton.

And, Antonio Rago, who looks to have won back his starting job at right back, was having a monster of a match, bossing his side of the pitch and regularly winning possession back for the Eddies.

Early in the second half, it was Rago who was the author of the Pinto goal, delivering an inch-perfect cross from the right wing that fell between Whitecaps defenders Greg Klazura and Carlyle Mitchell. Pinto chested it into the goal.

And, for 20 minutes from there, it was time for Whitecaps’ fans to feel nerves. But Le Toux was brought in and did the business — and the Whitecaps swamped FCE late.

Le Toux headed in a free kick from Chiumiento to make it 2-1, just seconds after Monsalve had pushed Etienne Barbara’s penalty kick off the post.

Barbara, last year’s NASL MVP and no stranger to the Eddies, made his Whitecaps debut as a sub and, with his first touch, skipped past defender Paul Hamilton, then past Monsalve, and went down after Hamilton pushed him in the back.

In the final minute of play, Darren Mattocks, coming back from burns suffered in a cooking incident, turned a perfect low cross from Chiumiento past Monsalve, exaggerating the scoreline somewhat, but cinching the Whitecaps a win they deserved over two legs.

The Whitecaps will likely start a radically different lineup on Saturday in New England. But, for FCE, which won its first game of the NASL season on Sunday — an emphatic 3-0 triumph over Carolina — the 75 minutes of solid play against the Caps will only add to their confidence.

“I definitely think we are beginning to gel,” said Lam. “Playing up front together, everyone is beginning to know their spaces and our tendencies.”