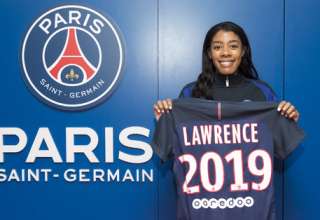 The Canadian, who won bronze with the national women’s team at the Rio Olympics and a was a regular starter at the 2015 World Cup, helped the University of West Virginia get to the NCAA final in 2016. Lawrence will forego her senior year of eligibility at WVU to begin her professional career.

Yes, it did come in a press release (so a grain of salt is needed), but the raves are in from her new boss.

“Ashley is one of the most promising young players in the world under 22 years of age at her position, “said Olivier Letang, Paris Saint-Germain’s sports director. It’s very satisfying to see her sign for us looking to continue her development and show her talents to the Parisian fans. Her arrival is in perfect keeping with our policy of bringing up talented young players alongside established world-class talents.”

Lawrence, as the jersey shows, is signed till 2019.

PSG finished second in the French league last season and got to the final of the Women’s Champions League in 2015.