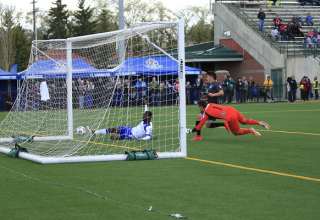 FC Edmonton was less than 10 minutes away from yet another Kardiac Kids comeback win. After going down 1-0 to Minnesota United just 71 seconds after the opening kickoff, the Eddies had scored two second-half goals to take the lead.

Then, it all changed on what looked to be an innocuous play. Minnesota fullback Justin Davis got into the penalty are with the ball, and looked to have run himself into a corner; he wasn’t facing goal and he didn’t have a shooting angle. At best, he could hope to turn and pop a cross to the centre of the area. But FC Edmonton substitute Michael Nonni elected to dive in. Even though Nonni got all ball with the tackle, Davis went down and referee Geoff Gamble pointed to the spot.

Before Jamie Watson converted the penalty to give the visitors a 2-2 draw with the Eddies, Gamble sent FCE forward Daryl Fordyce off for arguing the call. The player says that the referee “misheard” what was being said. But FCE will not appeal, as NASL fines teams for lost appeal attempts. And teams are only allowed two appeals per season.

So, down to 10 men, the Eddies ended up needing to hang on for the draw in a game that they dominated for long stretches.

“The referee has apologized to me for a call that he made last year,” said FCE coach Colin Miller after the match. “Now he owes me another apology.” Miller said that he didn’t need replays to see that the call was the wrong one — that in real time he saw that Nonni got all ball on the challenge.

Miller said the “criminal decision” undid a lot of good work by his club. Outside of the first minute of the game, he felt that the Eddies had played their most complete match of the year.

Minnesota United coach Manny Lagos said that he would need to see replays to see if Gamble had indeed made the correct call, but he pointed out that, when a player slides to make a tackle from behind in the box, he always runs the risk of the referee pointing to the spot. And Lagos felt that, earlier in the game, his fullback, Davis, was wrongly penalized — and the free kick was buried by Lance Laing.

Nonni, who had just come into the game for right winger Sainey Nyassi, could be criticized for deciding to dive in and making that challenge, who was not in a threatening position. Basically, don’t put the referee in a position where he has to make a bang-bang decision.

The game started like too many Eddies games have started this year; the Eddies have already given up a goal at the 12-second mark in league play, and the 56-second mark in Cup play. Starting with a full-strength 11 despite playing Ottawa in Cup play Wednesday and having to play the Vancouver Whitecaps this coming Wednesday, the Eddies got off to another dreadful start. Miguel Ibarra was credited with the marker 71 seconds in that could just has easily been credited as an own goal to keeper Matt Van Oekel.

After right back Eddie Edward fell down, the ball was released down Minnesota’s left side to Ibarra. His first cross was blocked; then he tried to play another ball across the face of goal. Defender Mallan Roberts and Van Oekel each tried to block the pass, which was headed right for a wide open Pablo Campos for a tap-in. The ball hit Van Oekel, changed direction and rolled across the line. To be fair to Van Oekel, with Campos wide open behind him, had he not touched the ball, the Minnesota striker would have tapped home the Ibarra pass.

But, after conceding, it was Edmonton who then controlled the remainder of the first half; that was especially true down the left wing, where Minnesota United’s Jonny Steele was being run ragged by Laing.

Laing delivered a cross that Fordyce headed towards the goal, only to have Minnesota keeper Mitch Hildebrandt make the fingertip save at full stretch.

Then, Steele compounded what was a miserable afternoon for him with an awful back pass that set FCE’s Tomi Ameobi in alone on goal. Hildebrandt came out, just got a piece of the shot, but it was enough to change the direction of the ball so that it kissed the goalpost rather than going in.

But the Eddies kept up the pace in the second half; and, after Davis was whistled for fouling Edward, Laing slammed a free kick into the top corner.

“I’ve been coming to training early for the last couple of days and practising free kicks from that exact same spot,” said Laing. “And I’ve been able to hit a few of them into the top corner just like that.”

Laing’s dominant, man-of-the-match performance continued when he got behind the defence on the left wing — after being sprung by a great diagonal ball from Cristian Raudales. He then laid the ball across the goal for Ameobi to slide onto and drive across the line.

Van Oekel made a good save on Davis, and Eddies’ captain Albert Watson and had to leave the game after picking up an injury when he fouled Campos. Watson had tried to play through the pain, but ended up needing to go out. Kareem Moses moved from left back to centre back, and FCE Academy graduate Allan Zebie was given his NASL debut.