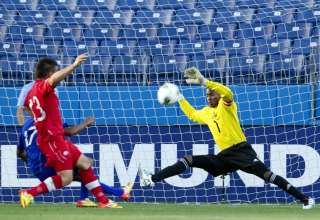 After 90 minutes, Canada’s Under-23 team was looking at a very real prospect of improbably winning their group at the 2012 CONCACAF Olympic qualifying tournament, thus playing a more favourable opponent in the most important game of the tournament.

Canada looked comfortable until substitute Maykel Reyes leapt high and headed past a helpless Michal Misciewicz, who had kept a spotless goalkeeping record through every other minute of the tournament to date. The game ended in a 1-1 draw.

The goal nullified Evan James’ first half goal and means Canada finishes second in Group A and a likely date with a powerhouse Mexican team on Saturday.

“We knew coming into this game that it was going to be difficult. The third game in five days always takes a toll on the players. We spoke about that, we spoke about managing the game a little bit better,” said Canadian coach Tony Fonseca. “Unfortunately it didn’t work the way we intended.”

Canada will have to head into Saturday’s game with very few options up front as before the game it was reported that Babayele Sodade had torn an ACL in a knee and Randy Edwini-Bonsu was getting suspended for two games for his red card against the United States.

With the suspension, Edwini-Bonsu missed Monday’s game and will miss the semis. He already told his club team in Germany, Eintracht Braunschweig, that he would rejoin them after the semifinal game so his tournament is officially over.

Coming into the tournament, many would have said they would be happy if Canada came in second in the group behind the Americans. But after the win on Saturday, it became first place or bust. Fortunately for the team members, after a grueling three games in five days, they know finally have a few days to rest and prepare for another game they won’t be supposed to win.

“We didn’t qualify in the way we wanted to –we obviously wanted to finish top of our group,” said Misciewicz, who’s been a revelation for Canada in goal. “It didn’t happen but it’s not the end of the world.”

James’ goal came of a well worked play where Lucas Cavallini led an attack on the left side before crossing to James who ably took his shot to the left of Odisnel Cooper in the Cuban goal.

The Montreal Impact player nearly doubled Canada’s lead in the 64th minute when his 25-yard shot wrong-footed Cooper. The Cuban goalkeeper recovered to get down and his hands to the ball.

Cooper proved to be Cuba’s hero when Russell Teibert’s free kick in the 72nd minute seemed destined for the top-right corner. The goalkeeper, who Cuban coach Raul Gonzalez said may be involved in the senior side in June against Canada, dove splendidly to his left to force a corner.

“It was never going to be easy—it doesn’t matter who you play so we are happy at this point that we get ourselves in a position to actually play a game that will allow us to go or not into the Olympics and that’s all that matters at this point in time,” said Fonseca.

“The most important thing is recovery, emotionally and physically.”

The second half lacked all flow as Canada looked secure in advancing and Cuba looked to be just wanting the tournament to end after allowing 11 goals, scoring none, having two players sent off and potentially losing another, Yosmel de Armas, to a rumoured defection. But Reyes rose well to head home a Dayron Blanco free kick and the relief and joy on his teammates faces as they celebrated shows they salvaged some pride.