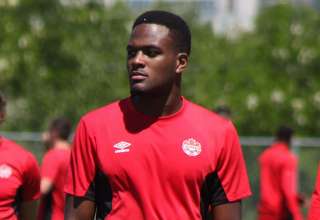 The writer of this article feels that the rule that allows national teams to make up to six roster changes after the group stage of the Gold Cup is yet another example why CONCACAF’s championship is so hard to take seriously. Allowing coaches to basically keep players in their pockets for the later stages of the tournament, well, it cheapens the group stage — and it’s not fair to players who have made their nations 23-man rosters that they could later “un-make” the team.

That being stated, because the rules are there, it’s hard to sniff at any national-team program that takes advantage of them. And these rules gave Canadian national team head coach Octavio Zambrano a golden opportunity to deal with his Cyle Larin problem.

Just before the Gold Cup rosters were due, Larin was charged with DUI in Orlando, Fla. He apologized and entered an MLS-mandated substance-treatment program. The national-team program needed to respond, but in a way where “doing the right thing” didn’t veer into the territory of “cutting off the nose to spite the face.”

So, Zambrano left Larin off the roster for the group stage, knowing full well he could burn one of his six allowed changes on the Orlando City star if Canada got out of the group stage.

And, on Sunday, to no one’s surprise, Larin was added to the Canadian roster. Toronto FC midfielder Raheem Edwards was deactivated to make room for Larin.

It’s awfully nice of CONCACAF to have a rule in place that allowed Canada to get tough with Larin, but not too tough.