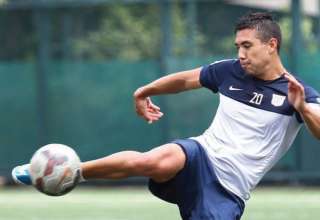 There’s a good chance that Matt Lam will join the ranks of Canadian prospects who have answered the calls of other nations.

The former Ajax youth player, former Canadian U-20 midfielder and ex-FC Edmonton midfielder is waiting on his paperwork that would make him eligible to join the Hong Kong national side.

Lam joined Hong Kong side Kitchee SC last winter, after being released by the Eddies. He’s become a regular starter at the club He scored in AFC Cup qualifying in the previous campaign. He also put in a very decent shift in an off-season friendly against Manchester United. And he’s looking like a sure thing for a league championship this season, as Kitchee is still undefeated in the league, and, as of the second week of March, had a 10-point cushion atop the table.

“We have quite a bit of depth in the squad this year,” says Lam. “We signed a couple of strong players, a couple of new foreign players as well, too. The top scorer in the league (Juan Belencoso) is from us, a new Spanish striker who has been fantastic. We also just signed another new Spanish striker because, in the AFC rounds, we’ll need a bit more depth up front.”

But Lam has been frustrated by the process of getting his paperwork to make him a domestic in the Hong Kong FA.

“It was a bit frustrating when I found out. The process was going so smoothly until the last hurdle, when I got the letter back that said ‘unfortunately, we cannot grant you the permanent residency at this time.’ It was in the papers here, it was a big shock. That’s because the Hong Kong national team is really interested in having me join them, as well.”

And he’s listening to the overtures from the HK national side.

“I’ve kind of been off Canada’s radar for a while now,” says Lam. “And you play good games over here against strong Asian clubs, and it’s good for you, exposure-wise. You just never know.”

The rejection of the residency application also tripped up Kitchee SC’s management The club had planned for Lam to be a domestic player by the time the AFC Cup’s group stage (think of it Asia’s equivalent to the Europa League) began. AFC Cup rules limit teams to three foreigners each. With its Spanish signings, Kitchee had three more foreigners on its roster so, Lam became the odd man out, even though he scored for the club in AFC Cup qualifying.

Kitchee had built its roster with the assumption that Lam would be a Hong Kong national by the time the team lists would have to be submitted to the Asian Football Confederation. But the delays put those plans in the dumper.

Lam says that once the application is re-submitted, it should take about three more months to process.

Lam’s false starts weren’t just limited to the passport kerfuffle and the AFC Cup-roster fallout. In November, Lam scored what he thought would be his first league goal in a 5-0 win over Tuen Mun. But, in February, the Hong Kong Football Association threw both Tuen Mun and Happy Valley out of the league, and all results against those teams were vacated, including the scoring records.

But Lam did finally get that goal on March 9, in a 4-1 win over Biu Chun Rangers. He also set up a goal in his team’s victory.

Soon, he hopes to be scoring goals for his new home.