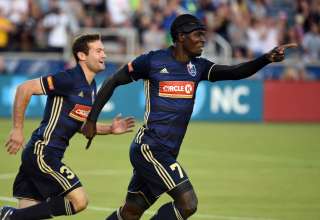 When Lance Laing was part of FC Edmonton, the club’s supporters were spoiled by his dead-ball abilities. Another week, another spectacular left-footed effort.

Just three minutes after the start of Saturday’s game in North Carolina, the Eddies found out what it was like to be on the other end of a Laing free-kick special. His 25-yard whomp sailed into the top corner of the net.

It would be the first of many for the home side, as North Carolina FC would go on to a 3-1 triumph.

North Carolina FC doubled their advantage halfway through the first half, when Nazmi Albadawi was allowed acres of space in the middle of the park, allowing him to charge upfield and then dash around FCE defender Albert Watson. Albadawi slotted the shot home after being allowed to go yards and yards and yards without a white FCE shirt coming near him.

The coach said that he felt Di Biase was having a poor outing, but “that really, I could have changed seven or eight of the players out there.”

Sainey Nyassi was brought in for FCE striker Jake Keegan at halftime; so, by the time the second half kicked off, Miller had already used two of his three available subs.

“I don’t think Carolina will have an easier 45 minutes than they did in that first half,” said FCE’s coach.

And, two minutes into the second, it was 3-0 as Matt Fondy finished a cross from Steven Miller. FCE keeper Chris Konopka came off his line to try to get to the cross, but was late getting there.

“We can’t give up three goals and then decide that we’re going to play,” said FCE’s coach.

Sabri Khattab came in for Nik Ledgerwood in the the 70th, as Colin Miller burned the last of his substitutions.

In the 71st, the Eddies got their first goal of the 2017 NASL spring season (in match no. 3). Nyassi’s cross found the head of Dean Shiels. The ball then crashed off the woodwork, came right back at Shiels, then ricocheted to Tomi Ameobi, who stuck the ball in a open goal.

With 10 minutes to go, Brian Shriver had a chance to get NCFC its fourth. He had a great look in front of the Eddies’ goal, but scuffed his shot, which allowed Konopka to smother what was a fairly tepid shot.

Fondy then had a great chance to grab his brace. He was alone in the box, but then hesitated on the ball, allowing a charging Konopka to swipe it off his foot.

Point being: At 3-1, the scoreline was kind to the Eddies.

Centre back Pape Diakite, who missed last week’s game against Jacksonville, made the trip to Cary, N.C. but didn’t play. Colin Miller said that Diakite missed a lot of training time over the last couple of weeks, so the coach didn’t want to risk the player. He said Diakite will definitely start next week against for Puerto Rico for the Eddies, who now have three losses in three games.

“The question is, who will be playing next to him?” said the FCE coach.

Canadian midfielder Ben Fisk didn’t make the trip. The coach said that Fisk “had a poor first two games, by his standards” and was moved down the depth chart. But, after Saturday’s performance by the Eddies, Fisk will have every opportunity to get back into the lineup for next weekend’s Puerto Rico visit.