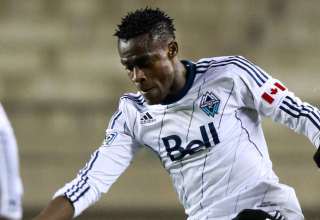 Canada’s ability to naturalize soccer prospects thanks to our professional teams may do our national soccer program a lot of good down the road.

The Vancouver Whitecaps announced Tuesday that midfielder Gershon Koffie has earned his Canadian permanent-resident card. That card is considered the final step before getting full citizenship.

And, for the Whitecaps, who signed the Ghana-born central midfielder to an extension, it means that Koffie now counts as a Canadian player on the roster. Koffie has only represented Ghana at the youth levels, so, when the passport comes, he could be eligible for a Canada call-up. Technically, under FIFA rules, in order to make the switch, a player needs to already be naturalized into the second country at the time he appears as a youth for the first. In Koffie’s case, we wasn’t yet a Canadian citizen when he appeared as a Ghana U-20, so wouldn’t be eligible for Canada. But, as Martin MacMahon has pointed out at Goal.com (CLICK HERE), that rule has been successfully challenged in the past. There is a precedent of FIFA relaxing the rules based on the naturalization of players.

And remember that, in 2011, the Whitecaps already successfully appealed to FIFA. At first, it looked as if Omar Salgado would not be eligible to play in Canada in his rookie MLS season because he switched from the Mexican youth system to the American youth set-up, and wasn’t eligible to play in a third country. But the Whitecaps got FIFA to green-light the Salgado deal.

“I’m really glad to become a permanent resident of Canada,” said Koffie in a release issued by the Whitecaps. “The fans have been fantastic since I came to Vancouver in 2010. They’ve welcomed me and made this my home. I love this city and I can’t wait to get back on the field.”

Koffie becomes the second major, ahem, Canadian prospect to get his permanent-resident card over the last couple of weeks. Mallan Roberts, the Sierra-Leone born, hulking central-defence prospect who just moved up from FC Edmonton’s reserves to the senior team also just got his card and expects to have his passport some time this year. Roberts has already said that he’s looking forward to the chance to represent Canada one day.

Canadians have always prided themselves on offering a welcoming home to immigrants and refugees; so, if our policy of inclusion also means that we can nationalize some soccer prospects, more power to us. And, if Koffie does intend on playing for Canada down the road, or even makes himself available for selection, there is absolutely no qualm with the midfielder now being a domestic player.

There is something really touching about someone who comes to Canada and embraces this country. Personally, I’ll always remember wrestler Daniel Igali’s gold-medal dance around the flag at the 2000 Summer Olympics as one of the most uniquely patriotic displays of Canadian-ness I’ve seen.