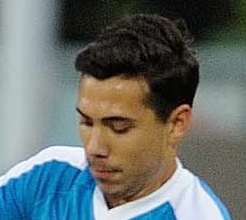 Canadian midfielder Matt Lam was able to savour a trophy win on Saturday, but an injury kept him off the field.

The former FC Edmonton midfielder had to remain on the sidelines as his Kitchee SC side beat Sun Pegasus 1-0 in the Hong Kong FA Cup final. Substitute Pablo Counago got the winning goal.

For Kitchee, the FA Cup salvages a season which saw it lose the league title to arch rival South China AA.

But Lam, who had been a regular starter since he signed with Kitchee earlier this year, couldn’t take part in the final. Lam told The 11 he was “disappointed” to be a game-time scratch, as Kitchee coach Josep Gombau held out as long as he could to see if his midfielder’s “tweaked” ankle would be good enough for game action. Unfortunately, the decision didn’t go Lam’s way and he had to play the role of cheerleader.

Lam, because he joined the team in 2013, after the competition began, isn’t eligible to play in this week’s AFC Cup Round of 16 match between Kitchee and Malaysian side, Kelantan. But Lam will play for Kitchee in a Hong Kong playoff for a spot in next season’s AFC Cup — which is Asia’s equivalent to the Europa League.

Lam will return to Canada at the end of May for some R and R; but Kitchee is slated to play a summer friendly against Manchester United, which will be one of Man U.’s first matches with new manager David Moyes in charge.