January 17, 2021
9 New Articles
Home Global Game CONCACAF Kicking a ball and pretending to be hurt: Costa Rica beats Canada on field, and in the acting department 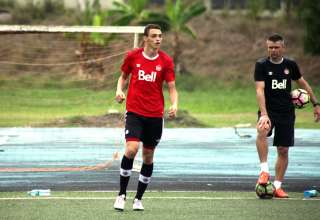 Jose Alfaro scored two goals, including the winner deep into stoppage time, but his performance wasn’t the main talking point of Canada’s opener at the CONCACAF U-17 Championships, Saturday.

Alfaro got the two goals in Costa Rica’s 2-1 win, but the best, ahem, performance of the day went to his teammate, Fernand Faerron Tristan.

Tristan went to the ground, his legs shaking, his hands covering his face, after he received a hand to the face from Canada’s Antonio Rocco Romeo in the second half. Romeo had earlier scored the equalizer, but was sent off for the slap.

Costa Rica made the man advantage count when Alfaro headed in the match-winner.

Tristan, you’ll be glad to hear, was OK. He miraculously returned to the match, his restorative powers on like, Wolverine level.

First off, I’m not defending Romeo. He put a hand to an opposing player’s face. That’ll get you sent off in most places. But, like all youth players who put on Canadian jerseys, he needs to learn that playing in Central America means that you don’t even get away with looking at someone the wrong way.

But, at the same time, faking an injury to ensure an opponent gets sent off, well, it’s embarrassing conduct. It’s indefensible. In a perfect world, soccer officials would have the encouragement from the higher-ups to send off both the aggressor and the faker in these sort of situations. That would be just.

Or, when it comes to faking injury, there’s a quick and easy fix. Try this idea on for size: if a player is down and requires treatment, five minutes must pass before he’s allowed back on the field. Set a “required treatment time” for injuries (or faked injuries). So, if a player is rolling around in a cowardly fashion, he knows that, in exchange for getting someone on the opposing team in trouble, he’ll also put his team a man down for a short time – or force the coach to sub him out.

For players who are legitimately hurt, trainers will have more time to assess their injuries.

As soon as the referee makes the two-hand gesture for a stretcher or waves the trainer on, there would be no wiggle room. The “injury clock” starts at five minutes.

Look, it wouldn’t be a bad rule: Already, we’ve had lots of discussion about players with head injuries being rushed back into games.

But, sooner or later, we finally have to stop paying lip service to making changes to the game, and actually, well, make changes to the game. Because the lasting highlight from this match won’t be of any of the goals; it will be a slap to the face followed by an egregious bit of play-acting.

I’m tired of being indignant when soccer fans get trolled on message boards or in social media, when we’re told we like a lame sport. When things like the Canada-Costa Rica game happen, the only thing we can do is shrug and tell the trolls, “you’re right.”

As so wisely said by Beast Boy in Teen Titans Go!, soccer is so boring because all the game is “people kicking a ball and pretending to be hurt.” Damn straight, Beast Boy.

(And if you don’t watch Teen Titans Go!, you should. For years it has trumped the Simpsons or the Family Guy as the most biting animated satire on TV. I’m not kidding. Really.)