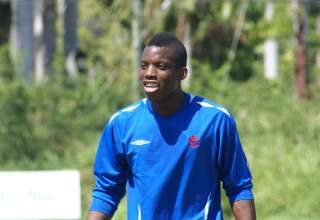 When your team is desperate for an equalizer, you normally don’t look to your keeper to provide the goal.

His goal Wednesday gave Canada a 2-2 draw with England, keeping this country’s hopes alive entering Saturday’s Group C finale against Rwanda. England, which has four points, will play Uruguay, which knows it is off to the elimination round with six points already in the bag. Canada has one, Rwanda, zero.

Trailing 2-1 in the 87th minute, Roberts prepared to boot the ball from his own half, hoping an attacker could latch onto the ball deep in England territory. Roberts strolled out of his box, the ball at his feet, and moved up several yards as the English players all moved back to cover the Canadians heading deep into their territory. Roberts, who only got the start because regular No. 1 Maxime Crepeau is out with a knee injury, sent the ball towards the England end. No one got a head to it. It bounced in the penalty area and bounded over keeper Jordan Pickford.

It was the unlikeliest of goals that gave Canada its first-ever point at the U-17 World Cup. See it HERE as part of the FIFA highlight package.

Not only did Roberts become the first goalie to score in the history of the U-17 World Cup, he became the first keeper to hit the scoresheet in any FIFA final tournament. He started this tourney as a back-up and now he holds a record that no one can ever take from him.

“This a great day for Canada’s football. We’re really happy with the result. We knew England was a great side. We bent, but we didn’t break in this game,” coach Sean Fleming told FIFA.com after the match.

After a scoreless first half that saw England dominate possession and create a large number of chances — but saw chance after chance wasted with shots sprayed high and/or wide — the Three Lions got on the board quickly into the second half.

But Canada drew level in the 50th minute, four minutes after the Morgan opener. Yassin Essa worked hard to win the ball deep in English territory after teammate Bryce Alderson had lost possession. He slipped the ball to Alderson, who teed it up for Keven Aleman at the top of the English penalty area. His low drive was palmed away by Pickford. But it fell to Sadi Jalali — and the Edmonton product did what good goal scorers do; he drove his volley into the ground, and the ball bounced over Pickford and into the goal.

The game settled down for almost a half-hour, as the altitude in Mexico looked to take a toll on the teams. Once England had taken a tired Powell out of the game, it looked as if the Three Lions were out of ideas.

But Blair Turgott gave England the lead in the 77th minute with a moment of brilliance, He dashed in from the left flank to the top of the box, turned and was able to hit a dipping right footed shot that got over an outstretched Roberts and dipped under the bar.