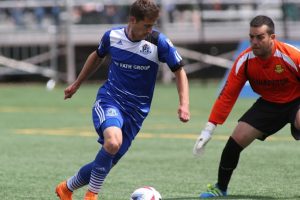 Jake Keegan scored twice Sunday to give the Eddies a 2-1 win over the Fort Lauderdale Strikers at Clarke Field.

Had the Eddies not slipped up two weeks ago at last-place Miami, they would have taken the spring-season crown. But, remember that two of the NASL’s playoff spots are awarded to the teams with the best overall records — spring and fall — who aren’t spring or fall champs. And, being just one point out of first puts the Eddies right in the mix.

“If you would have told me in the preseason that we would have finished third in the spring, I would have taken it, considering the quality of teams in this league,” said FCE coach Colin Miller.

“If we wouldn’t have slipped up in Miami two weeks ago, we’d be having a party right now,” said Keegan, who opened the scoring with his foot and scored the second with the back of his head.

He gave the Eddies a 1-0 lead in the 17th minute; a great ball from Daryl Fordyce slashed through the Strikers’ flat back four. Keegan sprinted on to the ball and went alone into the penalty area. But Strikers keeper Diego Restrepo came charging off his line to take away the shooting angle. Keegan paused. Restrepo paused. The waiting game was on… and Restrepo bit first, opening his legs. Keegan slotted the ball through them and into the goal.

Keegan got his second later in the first half, when somehow Eddie Edward’s looping cross hit him in the back of the head and then sprung into the goal. Gale Agbossoumonde was marking Keegan, but didn’t get ball side or goal side. Restrepo came out for the cross, but flapped at it. In the end, poor goalkeeping and slack marking allowed Keegan, who was in between, to make contact.

“Between the centre back and the keeper, I don’t know how I got my head on it,” said Keegan.

While Fort Lauderdale was poor in the first half, the Strikers were energized and played with purpose in the second half. And it didn’t take them long to halve the lead; PC sruck a penalty kick right up the middle after Eddies centre back Pape Diakite was penalized for putting his hand on the shoulder of Striker Ramon Nunez in the area.

With the Strikers pushing forward, Keegan got a wonderful counterattacking opportunity to complete the hat trick. A ball from Dustin Corea put Keegan in alone, but this time around Restrepo kept his legs closed, and made the save. Corea also had a glorious chance to get the Eddies their third, but it was blocked.