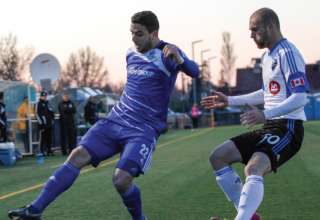 While the team has a definite penchant for older imported, often Italian, players at the top of its roster, the Montreal Impact has also shown a determination to nurture local talent, develop young players and have them fill the ranks of the first team.

The Montreal Impact Academy was established in 2010, and has sent eight players to the pro squad with five of them seeing MLS action with the Impact this season.

Ouimette was the first to sign a pro contract, inking his agreement on June 5, 2012 and got into his first MLS about six weeks later.

“I don’t think it’s a stressor, there’s more pride there than stress,” Ouimette replies when asked about the pressures and expectations involved in becoming the first local youngster to make the jump to the first team. “I achieved something that nobody had before, holding the door open for other guys from the academy to come in. I don’t think it was a stressor because nobody had ever done it before. The more you do the more you allow others to do after. It’s like being the first adventurer to find a new land or something. It’s pretty nice.”

When money enters the picture, so does the fact that professionals spend as much time competing against teammates in training to obtain playing time as they do battling opposing teams for points in the standings.

In some cases, they’re going up against long-time teammates.

“For sure there’s going to be competitiveness and everything but at the academy we have a great unity,” Ouimette says. “We’re happy when some of us go on the field because we’re representing the Academy. For sure you want minutes everybody’s going hard to get minutes but it’s part of the game.

The most recent graduate to the MLS roster is forward Jackson-Hamel, who joined the first team on August 1 of this year.

“It was a special moment, it was great,” he says. “Now I’m just working hard to get more minutes to play.”

The first forward to come up through the ranks, Jackson-Hamel joined a team with two established strikers, Marco Di Vaio and Jack McInerney, already on the roster. He has his work cut out for him but appreciates the support he gets from the veterans.

Possessed of a definite nose for the net, Jackson-Hamel recorded four goals in six PDL outings before signing his deal and has registered a hat trick against New York Red Bulls in Reserve League action.

“The academy definitely gave me the character I have today because, at 15, I was way different than I am right now,” says goalkeeper Crépeau, who inked his pro deal in March of this year. “My character is really a lot stronger and they helped me with my mental capacity to push my limits a little bit further. In the technical and physical areas, they helped me a lot because every day we were either on the pitch or in the gym. They helped us grow through this and reach another level.

“The level of play with the academy was better for me, I think, because we played big teams,” Crépeau says. “We didn’t play colleges or CEGEPS, just universities and even then only in the preseason. When I was with  them we were playing in the CSL [Canadian Soccer League, which was later stripped of its sanction by the Canadian Soccer Association], which is based in Ontario. All the teams are semi-professional so they were pretty great games compared to university.”

Still awaiting his first MLS minutes, the 20-year-old has nothing but praise for the other men who comprise the Impact’s goalkeeping quartet — Troy Perkins, Evan Bush and coach Youssef Dahha.

“Troy and Evan are really good guys, and good men before the soccer part and really good partners,” Crépeau says. “Every time in training when I make a little mistake they’re like ‘Hey, Max, look at your step, look at this, look at that.’ They’re really nice with me. We have a very good team spirit between the three goalkeepers and our coach.

The kid from Greenfield Park, Quebec and the Moroccan coach have a shared history.

“He started to train me when I was 12 so it’s been eight years now we’ve been working on my play. I give a lot of credit to that man because he taught me everything I do on the pitch right now.”

Crépeau may not get to stand between the uprights for the Impact this season, but he knows at some point he will get the call.

“I’m really looking forward to it. It’s very exciting because it’s the best level I can play in North America so I’m really anxious and excited. When I will get my opportunity I will take it and go from there.”

“The Academy is a great program,” says Tissot, who turned pro alongside Lefèvre in February, 2013. “It’s built great players, we’re even now with the first team and with the younger squads things are going really well. It’s a great program to be a part of and I’m really proud to have graduated from that program.It prepares you, not only on the field but off the field as well. We become men over there and it translates in our game. We’ve built a strong structure with the academy and we’ve tried to bring it to the first team.”

Signed as a defender, Tissot is more often seen in the midfield when he takes to the pitch.

“I like it. It was a bit difficult in the beginning because, usually when you’re defender, you have the whole game in front of you but, now, when you’re at midfield you have things both in front and behind you,” he explains. “I had to adjust to that but I think it’s going pretty well. I’ve been playing a lot of minutes towards the end of games so I’ve been getting used to it and I like it very much.”

To a man, the four young players who I interviewed are determined to make larger contributions to the Montreal Impact in the future and none have expressed any interest in playing elsewhere.