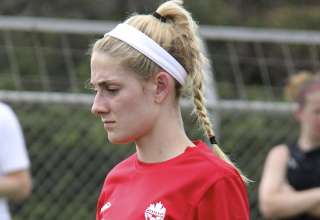 When you deal with teenagers, you accept that they may screw up. But, you’re happy when they learn lessons from their mistakes.

So, would Canada’s U-17 women’s team learn from their mistakes? That is, would they be able to protect a two-goal lead this time around?

On Saturday, the Canadians were in a must-win match against U-17 Women’s World Cup Group B leader, Ghana. In fact, the African side had already clinched a spot in the quarters, while the Canadians knew that if they won their final Group B match, they’d clinch the other quarter-final spot. It wouldn’t matter how the North Korea-Germany match played out.

And, at halftime, on the strength of a Marie Levasseur brace, Canada was up 2-0.

But we’ve seen this script before. In the Group B opener, Canada had a 2-0 lead, then went through a panicked five-minute spell where the European champions were allowed to score two quick goals. Canada had to settle for a tie.

So, when Bianca St. Georges was sent off for a last-man-back professional foul, the question was, would it happen again?

And when Sandra Owusu Ansah scored to halve the lead, you would have the emotional control of Spock if you weren’t fearing for the Canadian players.

Sura Yekka, a force down the left side, won ball after ball away from the Ghanaians.

But the best came from Rachel Jones; she came in to bolster the defence after St. Georges was dispatched from the match. With just a few ticks left on the game clock, Jones made two win-preserving plays. She made a great challenge to disturb a point-blank scoring chance for the Ghanaians; and, then, off a corner, Jones cleared another chance off the line.

Levasseur will no doubt get the bulk of the credit; she did well to follow the rebound of her own blocked shot, and then curled home the second effort to give Canada the lead. And she did well to find a dead spot at the far post, where she headed home a perfect cross from Marie Mychele Metivier.

But, if not for the late interventions from Jones, Levasseur’s goals may have been bittersweet, not glorious.