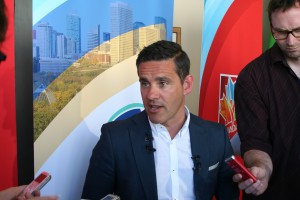 Viktor Frankl was a Holocaust survivor; despite being imprisoned in a Nazi concentration camp, he began to see the power of dedicating oneself to a cause. Basically, the chances of survival would increase with a positive outlook; after the war ended, his thesis expanded; if one had a positive outlook and was dedicated to something greater than oneself, then that person had laid the groundwork for success.

From Frankl’s Man’s Search for Meaning:

“Don’t aim at success — the more you aim at it and make it a target, the more you are going to miss it. For success, like happiness, cannot be pursued; it must ensue, and it only does so as the unintended side-effect of one’s personal dedication to a cause greater than oneself or as the by-product of one’s surrender to a person other than oneself. Happiness must happen, and the same holds for success: You have to let it happen by not caring about it. I want you to listen to what your conscience commands you to do and go on to carry it out to the best of your knowledge. Then you will live to see that in the long run — in the long run, I say — success will follow you precisely because you had forgotten to think of it.”

So, what does Viktor Frankl have to do with football?

Canadian national women’s team coach John Herdman is a big believer in the Frankl philosophy; and he shares some of the great Austrian psychologist’s messages with his players. On Monday, Herdman addressed the Edmonton Chamber of Commerce. As he was addressing the business leaders of the city — and it wasn’t solely a media event — he didn’t filter what he said.

And the result was a frank assessment of the Canadian women’s team’s evolution since he took the coaching job after the 2011 Women’s World Cup. He told the audience that he inherited a broken, passionless team that was willing to blame everyone but themselves for their failures.

That Canadian team, despite high expectations under then-head coach Carolina Morace, had finished dead last at the 2011 World Cup, after threats of going on strike over funding issues.

Herdman said what he inherited was a “toxic culture.” He said the team was “broken.” In less than a year, that same core of players won a bronze medal at the London Olympics. According to Herdman, there are three contributors to success: Vision, passion and discipline. But without passion for what he or she does, no one will endure the discipline needed to achieve a goal.

He said the women on the team had grown comfortable with blaming others for their failures. They had got used to making themselves the victims. When he arrived, he found that the players had laid the blame for the 2011 World Cup solely on Morace, and not on themselves.

“And it was like, ‘Germany gets this, we don’t get that,’” said Herdman. Again, part of the victim/blame culture.

Finally, after some work, the players began to accept that it wasn’t all the previous coach’s fault. They began to understand that if some of them had risen to the occasion in the do-or-die game against France in the 2011 WC group stage, they could have changed the outcome.

But Herdman said the “previous two coaches” of the national team (that would be Morace and Even Pellerud) had instituted a rigid system where they did the talking, and the players weren’t allowed to question or discuss any of the decisions being made. Herdman’s style is to open a dialogue with the players, to make them part of the process. Basically, the previous two coaches had created the environment for the victim/blame culture to flourish.

He also spoke of the need to eliminate the “energy vampires,” because, in practice, “good mood equals good work.”

And he said that passion came to the fore when Canada played France in the Olympic bronze medal game, after losing the semifinal in heartbreaking fashion, 4-3 after extra time to the Americans.

“The French battered us, but one thing they didn’t take away from us was our spirit.”

WHY HE CAME TO CANADA

Herdman said that money isn’t all that important to him; but there was one reason he chose to leave the New Zealand program in 2011 to take the Canadian job: And that was to coach Canadian all-time leading scorer Christine Sinclair, who he called the “Lady Diana of sports.”

“I wanted to work with her, to say I worked with the Michael Jordan of football, in the women’s game.”

But he admitted that shifting her from her out-and-out striking position to the attacking midfield spot wasn’t smooth. He told the audience “she whinged about it” until she saw that she was actually having more success coming from a more withdrawn spot on the field.

For two years, Herdman had a picture of a dejected Sinclair, sitting on a German pitch after Canada had been eliminated from the World Cup. He used it as his inspiration for the Olympics and helping the Canadian women prepare for the upcoming Women’s World Cup, which kicks off in Edmonton on June 6.

And, he used that in the dressing room, too — would the team want to let Sinclair down, again?

“I had to break a taboo in women’s culture, to hold a woman out.”

And, after breaking them down, building the team back up, we are one week away from the announcement of the roster for the 2015 Women’s World Cup.

“You will get the best of them,” said Herdman. “I am hoping it will be enough.”

After his talk, he said he knows that Canada is an underdog. “There are five teams, on any given day, will beat Canada.” But he said the one wild card is home advantage.

Leading up to the tournament, the team will leave its Vancouver base for camps in Los Angeles, Mexico and Toronto. After they get to their southern destinations, the players will undergo heat-acclimation training. This isn’t because Herdman is concerned that Edmonton will undergo a heat wave in June (though, last year, I called an FC Edmonton game against Commonwealth, and temperatures soared well above 30 C in the stadium). What it’s meant to do is to train the body to produce more oxygen.

And will Diana Matheson, who injured her knee in a friendly against Japan last October, be on the roster?

Herdman said the midfielder will be undergoing tests over the next four or five days to “determine the probability of her being able to play in the World Cup.”

But, if Herdman does put her on the roster and she isn’t able to go, he has the luxury of being able to name alternates. He said he has up until 10 days ahead of Canada’s first game to replace an injured player with an alternate.