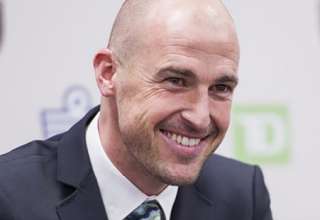 For the second time in the club’s relatively short history, the Ottawa Fury have a changing of the guard at the head coach position.

The club announced Tuesday that Paul Dalglish has resigned, effective immediately. Julian de Guzman moves up from the assistant-coach rank to take over the team.

“Paul informed the club that he intended to leave at the end of the season for personal reasons, however we jointly decided it would be better for the team to make that change now,” said Fury President John Pugh in a release issued by the club. “This decision will give Julian the opportunity to get the rest of the season under his belt, starting with a lengthy three-game road trip that will give the team a solid week together amidst this midseason change.”

This might all seem a bit too familiar to Fury fans. Two years ago, in the midst of a successful NASL campaign, the team announced that coach Marc Dos Santos would be leaving at the end of the season. He finished out the year and got the Fury to the NASL final, where it lost to the New York Cosmos. Dos Santos went on to coach Swope Park Rangers in the USL and moved back to NASL in 2017 as the head coach of the San Francisco Deltas.

This year, in reflecting on his time in Ottawa, Dos Santos said: “Don’t get me wrong; the ownership group in Ottawa is fantastic. But there was always the feeling that football and hockey were more important. When you work in an organization that has teams in three sports, you feel like soccer is always put on the waiting list.

In 2015, the Fury made the decision to allow Dos Santos to finish out the year. Dalglish, though, did not survive to the end of the season, even though the club has said the coach wanted to stay on to finish the campaign.

The Fury moved from NASL to USL for the 2017 season.

Of course, moving to a Canadian head coach, with Dalglish already planning to leave at the end of 2017, will only fan speculation about the team’s future in USL — as we near  the planned July 22, 2018 launch of the Canadian Premier League. Dalglish, publicly, was a staunch backer of USL — stating even when the Fury was in NASL his feelings that the two leagues were on level playing ground.