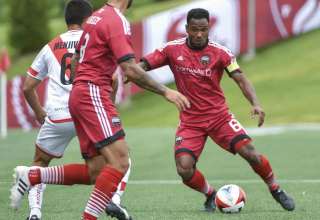 On Monday, he tearfully announced his retirement as a player, and his new role as an assistant coach with the USL’s Ottawa Fury. De Guzman, who spent the last two seasons of his career with the Fury (in NASL), hurt his knee in training last summer and hasn’t played competitively since that time.

De Guzman played for 10 teams throughout Europe and North America.

“Thank you to all the organizations and clubs I’ve been part of,” said de Guzman. He thanked the Ottawa Sports and Entertainment Group, which owns the Fury.

“Thanks to all the owners of OSEG for making a Canadian dream come true.”

He said his favourite soccer moment came in 2002, when he got his first national-team camp for that year’s Gold Cup. He made his debut against Martinique.

De Guzman recalled that he was brought in as a last-second replacement for Garret Kusch. When he got to the Canadian camp, he was given Kusch’s No. 16 jersey; de Guzman’s name was basically laid over on top — and the shirt was far too big for the midfielder.

But, for a player who would go on to play in the biggest stadiums in Spain, against some of the world’s top stars, it was the Canadian moments that stuck out the most.

When he played in the Bundesliga, he was thrilled to play against Canadians who had already established themselves there — like Kevin McKenna and Paul Stalteri.

“They were like gods for me,” said de Guzman.

De Guzman left school before he’d finished Grade 10 so he could play in Europe. He went to France and struggled to impress the coaches at Marseille. When he was told he was no longer wanted there, he went to Saarbrucken, then to Hannover. In 2005, he signed with Deportivo La Coruna, despite the fact La Liga teams were only allowed to sign three non-Europeans.

De Guzman said that, to make it in Europe, “I told myself I have to be different.”

“What he’s achieved is like me, as Scotsman, coming to Canada and captaining the Sens,” said Fury coach Paul Dalglish.

De Guzman said he sees both the good and bad of what Canadian soccer is becoming. He said he was thrilled to play at home for Toronto FC, and then play in Ottawa to finish his career. He said it’s simply huge for a Canadian player to be able to play club football in Canada, something that wasn’t an option for him when he was young. But, as someone who has been asked to help evaluate Canada’s U-15 talent pool — and has been a mentor on the Canadian national team to the younger players — he made a telling statement.

It was telling that, last year, then-Canadian national team coach Benito Floro brought de Guzman on Canada’s trip to Honduras, despite the fact his midfielder was out with the knee injury. It spoke to the value seen in having JDG as a mentor for the younger players. While he may be done playing, it looks as if JDG the coach will still have a lot of influence on Canadian soccer for years to come.