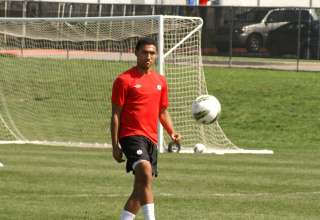 James, along with defenders Josh Gardner and Shavar Thomas, will not be going with the team on its post-season training jaunt to Italy. And the Impact confirmed Friday that the omissions mean that those three players won’t be back with the club in 2013.

Thomas and Gardner became peripheral figures on the team after Nelson Rivas returned to health (for a little while, at least) and Alessandro Nesta was brought into the fold.

James was the first player chosen in the MLS Supplemental Draft, out of UNC-Charlotte. He featured for the Canadian U-23 team for this past spring’s Olympic qualifiers and even was named to the roster of the senior national team for an August friendly against Trinidad and Tobago.

But, during his time with the Impact, he never did more than occupy a Canadian roster spot for the team, as he couldn’t get into an MLS match.

The question will be what’s next for James? It is worth noting that his best friend, Kyle Porter, is with FC Edmonton — and that FCE will be holding a Canadian player combine Nov. 28-30.