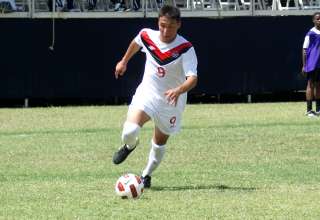 If you add the ages of Sadi Jalali and Kianz Froese Gonzalez together, you would still be short of 33 — the age of FC Edmonton veteran midfielder Ilja Van Leerdam.

But the two teens were on the same indoor pitch as the veteran at Edmonton’s Victoria Soccer Club Thursday morning. And, while the two teens are still getting settled as they begin training with the NASL team — neither wants to be too comfortable.

Both Jalali and Froese Gonzalez hope to be in Germany when the international transfer window opens in January. Both have agreements in principle to join German clubs; Jalali, an Edmontonian who played for Canada at the U-17 World Cup, is set to move to Kaiserslautern. Gonzalez Froese, a 15-year-old who was oh so close to going to the Vancouver Whitecaps Residency this summer, is set to go to Mainz 05. Gonzalez Frose, who was born in Havana and has split time between Cuba and Manitoba, played for the Cuban U-17 side.

The two players signed a unique deals with FC Edmonton; both have agreed to train with the club until their paperwork clears and they can go to Germany.

But, if their visa applications fall through or they don’t stick with their German clubs, FC Edmonton keeps right of first refusal on both players’ rights on this side of the ocean. So, if one or both comes back, they return to FC Edmonton to play.

“The mandate of this club is to help Canadian players get better, to help them succeed in Europe,” said FCE Director of Soccer Operations Joe Petrone. “But we would love to have them on the team, too.”

After Canada was eliminated from the U-17 World Cup in Mexico, Jalali had offers to go to Germany,

“An agent who I hooked up with after the World Cup, an agent in B.C., he asked me if I’d like to go on trial in Europe. I said yes and he said Germany is the best place. I was supposed to be there three weeks, but I ended up there for four or five weeks. The club had said that they wanted me after just a week and a half, but then there was a lot of paperwork.”

Froese Gonzalez was ready to go to the Whitecaps’ Residency, but got a phone call that indicated that there was German interest.

“When I came back from Cuba I thought I was going to be part of the Whitecaps,” he said. “But I flew to Germany with my dad.”

Now, for both players, it’s a case of hurry up and wait.

“Getting the visa is a complicated thing,” said Jalali. “It can take months for the visa. We are just hopeful to be able to go to Germany in January on the international transfer date.”

“But, it’s great playing with the best players in Edmonton,” said Froese Gonzalez. “It’s important to get fit now. The Germans have the top youth development programs in the world. And when we get there it’s going to be go, go, go.”

FC Edmonton was back at work this week, already preparing for the 2012 NASL season.