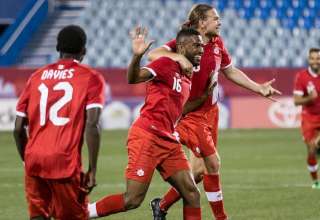 Junior Hoilett messed up his chance to be the hero — so Anthony Jackson-Hamel got the cape, instead.

Just seconds after Hoilett banked his penalty kick off the post, Jackson-Hamel’s long-range strike found the net, giving the Canadian men’s national side a 2-1 win over Curacao. The goal from the Montreal Impact striker ensured that Octavio Zambrano’s first match as national-team coach would end in a win.

But, that fact than only 6,026 bothered to head to Montreal’s Stade Saputo to take in the spectacle showed just how far Zambrano and the men’s national side have to go to win over a) casual sports fans b) disillusioned Canadian soccer supporters c) naysayers who claim Canada’s never gonna be any good.

To be fair, Curacao is about as un-sexy an opponent as can be found in CONCACAF.

Curacao doesn’t present many surprises; they play a similar style to many teams in the Caribbean at the moment. You line up 10 physically imposing players in front of your goalie, clog up the final third and be confident that you can win most of the 50-50 battles close to your net.

Through most of the first half, it worked — as the best Canada could do was a couple of long-range efforts from Cyle Larin and Will Johnson.

Then, with three minutes to go before halftime, Manjrekar James began a very busy sequence for himself. We saw Hyde. Then we saw Jekyll.

First, we watched as the Canadian centre back totally lost his man in the box. The man in question was Rangelo Janga, who got the ball and slammed it into the goal thanks to James’s slack defending.

But James got the chance to make it up thanks to a howler from Curacao keeper Eloy Room. Will Johnson floated in a free kick and Room looked to get caught in two minds — punch or catch? The result was that the ball bounced out of his arms and fell to James, who spun and shot the ball into an open goal.

Speaking of open goals, Larin should have made it 2-1 for Canada midway through the second half, but somehow, from just a couple of feet in front of goal, found a way to miss the net. Larin continues to get in good spaces but, unfortunately, the finishing touch he shows for Orlando City continues to evade him when he wears his country’s colours.

Zambrano gave debutant Raheem Edwards a spot in the starting XI. Edwards came out in the second half for 16-year-old Alphonso Davies. The kid from Edmonton made an instant impact, forcing a good save from Room after a nice square ball from Vancouver Whitecaps teammate Russell Teibert.

Then it was Jackson-Hamel who had a great chance;  but his shot deflected off Teibert before going into the net — and Teibert was so clearly offside, you’d have to be a Hungarian linseman in order not to notice.

Davies, then, came to the fore, with a dash up the left side and into Curacao’s penalty area. He was brought down by Shanon Carmelia, and referee Ted Unkel pointed to the spot. That set up the Hoilett miss, followed by the winner from Jackson-Hamel.

Juan Cordova was brought in late to make his Canadian national-team debut.