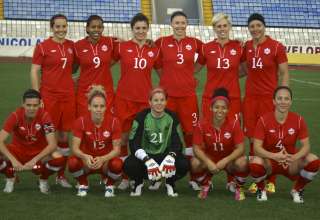 The Canadian national women’s team now has six points from two matches, and looks good to top its round-robin group. With just one-group-stage match left to go, against the Netherlands, Big Red has a 100 per cent record and a goal difference of plus-six.

Gayle was able to scramble home the winner in injury time after Chelsea Buckland won a battle for the ball in the penalty area.

Canada is being very low-key about the Cyprus Cup, as the team doesn’t want to give away too much information for its opponents at the 2012 Olympics to be able to use against them.

The Italian soccer federation wasn’t as kind. On its website, it blasted the referee for allowing the Gayle goal. The FIGC’s report stated the game was “spoiled by a foul in the penalty area that went undetected by the referee” before Gayle got the winner.

In the Canadian Soccer Association’s match report, Gayle said “I just kept my run going, Kaylyn Kyle kind of set a nice pick for me and I just placed it in.”
Christine Sinclair opened the scoring with her 131st career goal for the Canadian senior side. But Italian striker Sandy Iannella equalized for Italy just seconds after the second-half restart.

The Italians later hit the woodwork in the second half.