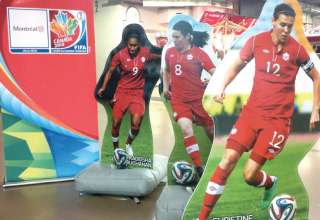 Canada got to the quarter-final stage of the recently completed U-20 Women’s World Cup, losing to the eventual champs from Germany. But, as we rocket towards next year’s Women’s World Cup, we need to be realistic about how our women’s program compares against the global elite…

With a few slaps to the back and lots of smiles, the man who is arguably the most powerful person in world sport got down to the business of making his hosts feel good about themselves.

He was there to open the FIFA Women’s U-20 World Cup, which was to kick-off the next night at Toronto’s BMO Field. At least that’s what the press release said. In reality he was there to promote and encourage the CSA’s 2026 men’s World Cup bid.

“It’s Canada’s time,” he exclaimed less than two minutes into the press conference. He was careful to give a passing nod to the women’s game — he said that women’s soccer drove the men’s game in Canada, unlike most of the world — but the focus remained firmly on a pipe dream 12 years away rather than on the reality that was 24 hours away.

“Chasing butterflies” is how one long-time Canadian soccer observer puts it. Canada is always off chasing the next sexy thing while ignoring the core problems that that are killing the game at the grassroots. It’s a rot that exists at every level of the game and it’s a rot from which the women’s side of the game is not immune.

Ottawa’s Bill Ault has been involved as a elite coach on the women’s side for many years. He rejects Blatter’s notion that the female game is driving the men’s game in Canada — at least not from a position of significant strength.

“We’re not as healthy as everyone thinks,” he stressed over the phone a week after the U-20s had wrapped up. “[The women] aren’t any better or worse than the men. We just have this illusion because of a result that most impartial observers would say was fortunate.”

That result, of course, was the 2012 Olympic bronze medal. That two-week run likely represented the high-water mark for Canadian soccer in at least 26 years. Considering the increase in popularity in the sport since Canada’s 1986 World Cup appearance, and the increased exposure that goes with that, you can likely extend that thought to all-time — Christine Sinclair became a household name in London, Dale Mitchell did not in 1986.

Although one should not discount the importance of that bronze medal from an inspirational perspective, one should also not allow it to blind him or her from seeing a full picture of how it came about.

The Canucks were determined, brave and Sinclair was on fire against the Americans, but they were also outshot 42-11 in the medal round. It wasn’t a breakthrough. It was an outlier.

In the days since, Canadian women’s team head coach John Herdman has done a great job in increasing the profile of the program and in convincing Canadians that the team is a legitimate World Cup contender. And, with a decent 11-9-5 (W-L-D) record since the Olympics, fans can be forgiven for taking his word.

However, a deeper look at the record reveals just three goals for and a 0-7-4 record against team’s ranked above Canada in the FIFA rankings. Two friendlies against the World Cup champions from Japan await in October.

Herdman may claim that he thinks Canada will be contending in next summer’s World Cup final, but it’s hard to make a logical argument to back that opinion up.

Heading into this summer’s U-20s there was some hope that the young girls might help bridge that gap in thinking. After all, Herdman has already integrated many of the team into the full senior team.

The results were solid — a first quarterfinal appearance at the U-20 level — but ultimately top sides still seemed a good distance beyond Canada talent-wise.

The overall effort and direction of the Canadians at the tournament were laudable but we must be blunt in our assessment. There’s just not enough talent and not enough resources in this country to get any better — not without significant, long-term changes.

“I think we still have good players,” Ault says. “But, we lack the technical skills and the mental strength — not the determination, but the ability to make smart decisions — to compete with the traditional nations.

Added up, it makes for a bleak prediction for next summer.

Simply put, there have been too many mistakes for too long at the development level for there to be a realistic chance for a long World Cup run. The small depth of field in the women’s game keeps Canada in the conversation, but no one should expect a repeat of London.

But, what of the future? Can changes be made to make Canada a legitimate challenger down the line? Could both 2015 and the potential of a 2026 men’s World Cup be the impetus to drive the game forward?

Maybe, says Ault. But, not without a significant change in direction.

The most significant of all might be a move away from our traditional development pathway. A pathway that relies far too heavily on the American NCAA system, which produces great athletes but not-so-great soccer players, says Ault.

It shouldn’t be lost on Canadians that the United States are no longer performing as well internationally on the women’s side of youth tournaments. The Americans failed to even qualify to the 2014 U-17s and advanced no further than Canada in the U-20s. When the Americans met the eventual champs from Germany in the group stage, they were simply outclassed.

Meanwhile, countries that have tied their women’s development into existing club infrastructure on the men’s side are leapfrogging the North Americans.

Breaking Canadians away from the NCAA is not going to be easy. It’s a system that has worked for elite players in the sense that they received good educations and the best can be filtered to the national team. How many great players have been lost or not fully developed can’t be known, but without an alternative pathway it’s difficult to convince players to go in a different direction.

According to one player agent who works with several members of the women’s team, there has been pressure applied at the national-team level for some younger players to forgo the NCAA route. However, they have refused because the CSA cannot guarantee them of an education if their national -team careers don’t pan out.

With no other clubs, the NCAA system remains the only option.

There are forces at play in Canada’s largest province to change that situation.

The Ontario Soccer Association’s Dino Rossi said that the organization is currently working to create a semipro women’s league to operate along side the semipro men’s League1 Ontario.

The desire to create the league is strong, but the OSA is only prepared to move forward if it can identify enough clubs willing to make a significant investment to ensure that professional coaching and administrative standards are maintained.

Rossi said it was too soon to say with certainty whether the OSA will be in a position to launch the league in 2015.

For a generation, Canadian soccer has been defined by a lot of good intentions with little follow-through. For Ault that’s frustrating. His goals are not about hosting World Cups or winning medals at the senior levels. Those things are nice, but they are a product of a healthy system, not what makes a system healthy.

Ultimately Canada’s system — for both genders — is sick. It doesn’t have to be, Ault stresses.