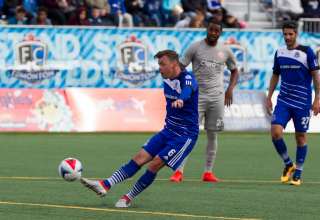 The New York Cosmos and FC Edmonton enter this week of NASL play tied atop the fall-season standings. FCE has a game in hand.

The Cosmos play twice this week, at home to the spring champ Indy Eleven and then on the road to Fort Lauderdale on the weekend? FCE plays in Ottawa Friday; they will kick off just as Canada’s World Cup qualifier in Honduras comes to a close. What should be a great rivalry game between the NASL’s two Canadian team will be utterly buried because it begins just as Canada’s biggest World Cup qualifier to date (of this cycle) comes to an end.

The question: Should these NASL teams be playing at all this weekend? Both the Cosmos and Eddies will be affected by international callups. The Eddies will be missing midfielders Nik Ledgerwood (Canada) and Shamit Shome (Canada U-20). Meanwhile, the Cosmos will lost three senior players to international games — including reigning player of the week Andres Flores, who is with El Salvador. Yasmani Duk (Bolivia) and David Ochieng (Kenya) are also gone.

In such a tight playoff race, a point gained this weekend could make all the difference in the final table. And games will be influenced by these absences. FCE coach Colin Miller thinks the league should consider breaking during the big international windows.

“I think if they do it in every other league, then they should do it… It’s certainly worth investigating from the league’s point of view.”

For NASL, it’s a great PR coup to be able to show fans that players from this league meet national-team standards. But, for coaches, it creates headaches to have to play through those windows.

“It’s a real positive in one aspect of it, because we’re now such a good standard of league that we’re attracting international football players,” said Miller. “But, at what point does the international call-up affect the standard of the league? When you take two or three of these international players out of their respective clubs, they might not necessarily be as strong in depth as some of the other clubs are.

“If they’re going to make these rules, they can make them pretty early, because it’s been consistent now — clubs in the league are signing international players. I would hate, at some point, for coaches and managers to be saying ‘well, he’s a current international, let’s not sign him because we’re going to lose him for seven or eight games in the season.’ That would be a negative on the league.”

Miller would know — last year, FCE lost Lance Laing to Jamaica duty for about a third of the regular-season schedule. Copa America, Gold Cup, friendlies. The Eddies won just once with Laing out — and it can be argued that it might have cost the club a playoff spot.

Miller said he also understands the club’s point of view: When he played in Scotland, he remembers how difficult it was for his managers to let him go play for Canada. And it’s difficult for the player — he understands the club is paying his salary, but representing one’s country is important, as well.

“For the players, they’re stuck between a rock and a hard place,” said Miller.

And, considering the league takes almost a month off between spring and fall seasons, maybe it’s time to not make its international-caliber players feel like they are caught trying to serve two masters. Maybe it’s time for the league to go dark during at least the major international windows, such as this weekend.