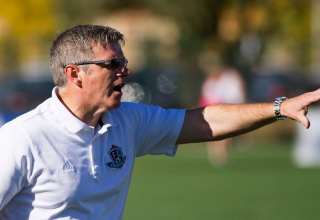 At the end of Thursday’s training session, FC Edmonton coach Colin Miller joked that he considered naming me to the squad that will travel to Atlanta this weekend to take on the NASL spring-champion Silverbacks.

That gives you an idea of just how many of the Eddies aren’t available to make the trip. Miller had to make the joke — after all, when you want to cry, you just have to laugh, instead.

Striker Michael Cox is likely done for the season. With concussions, both winger Massimo Mirabelli and left back Lance Laing are off the trip. Centre back Mallan Roberts continues to nurse a heel injury. Midfielders Gagan Dosanjh and Shaun Saiko have both suffered flare-ups of long-term injuries.

“We haven’t hot the bottom, but we do have a lot of injuries to deal with,” said Miller. “It’s really disappointing. They (injured players) will need to rest and we will play with what we have. We will still have a very strong starting 11.”

As for the subs, the bench will feature a lot of kids, and Miller said it’s a chance for them to prove themselves. The tactics will change a bit, but Miller said he was going to tweak the formation ahead of the Atlanta match, anyway. He said he has a plan in place for his subs and is excited to see what the kids bring.

Mirabelli and Laing suffered concussions when they ran into each other in last weekend’s loss to Minnesota. Both had their eyes on a ball in the air and ran smack-dab into each other.

“It’s so frustrating, it could have been prevented,” said Miller. “We go from having one of the best left backs in the league and one of the real up-and-coming players in this league to having to scramble to fill the spots.”

Dosanjh had knee surgery before he signed with FCE in the downtime between the spring and fall seasons. Miller said the knee has been aggravated by the weeks of playing and training on the old Clarke Stadium artificial turf, and Dosanjh needs rest.

Saiko tweaked an old foot injury that dates back two years, when FC Edmonton was playing on the even harder turf at their old Foote Field home.

And Cox’s knee is still swollen after colliding with Fort Lauderdale keeper Richard Sanchez a couple of weeks ago. Miller said it looks like there may be damage to the MCL. An MRI will be taken when the swelling goes down.

“Michael’s work has been admirable this season, it’s a shame,” said Miller. “At the start of the second season, we decided to back off a bit on Michael, with Anthony (Adur) and Corey (Hertzog) now in the team. People forget that he’s still only 20, the age when you’re still an apprentice. He’s coming into games as a sub, and he’d done some very good things.”