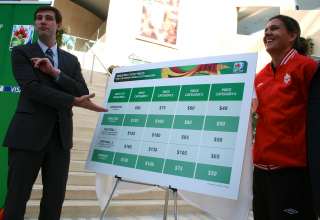 Edmonton Mayor Elect Don Iveson, left, and Christine Sinclair show off the ticket prices for the U-20 World Cup. They were at Edmonton City Hall for the event launch.

Edmonton Mayor Elect Don Iveson will be sworn into the new job Tuesday. His election win was the biggest blowout the city has seen since the Oilers were winning Stanley Cups.

And, on Monday, in one of his first official duties as the city’s head, he stood at City Hall, alongside Canadian Soccer Association President Victor Montagliani and Canadian women’s national team players Carmelina Moscato, Erin McLeod and Christine Sinclair to kick off ticket sales for the 2014 U-20 World Cup. Seven of the games will be played in Edmonton.

Iveson spoke of how the previous city council decided to spend millions to upgrade Commonwealth Stadium ahead of the 2014 U-20 World Cup and the 2015 Women’s World Cup. Edmonton will host more games in the 2015 WWC than any other city, including Canada’s first two matches.

But, for Edmonton soccer fans, there is more interest in hearing what Iveson has to say about the facility next door to Commonwealth Stadium. Clarke Stadium could be a practice facility for the women’s teams that come through Edmonton in the next two years. It’s adjacent to the Commonwealth Stadium fitness centre.

FC Edmonton owner Tom Fath has put new stands in Clarke to up capacity to a little more than 4,000. But the turf is at the end of its 10-year lifespan, and it has football lines sewn in. The turf has contributed to non-contact injuries to players, including FCE’s Carlyle Mitchell and Daryl Fordyce this season. Earlier this year, NASL commissioner Bill Peterson met with outgoing mayor Stephen Mandel to discuss the turf.

Oh, and it also looks brutal to the television audience.

But will it be changed? Will it be replaced with new turf that has erasable lines which can accommodate both football and soccer but not have the sports infringe on each other? That will be up to the new council.

Iveson said it will be a budget decision. And, for the new council, it’s too early to say yea or nay to changing the turf.

“We can’t say yet what will happen over there (Clarke) one way or the other. Will it be changed in time for next year? I can’t say at this point. People have to be aware that our resources are limited and potholes need to be addressed. Though, I do understand the turf at Clarke has potholes as well.”

What Iveson would want to see is a report on the turf. Did it meet its expected lifespan?

“Did it last as long as it was supposed to?” said the incoming mayor.

FCE General Manager Rod Proudfoot said that the club will be patient. It understands a new council is coming in, and that it needs to do its research on Clarke Stadium.

Iveson played men’s league soccer in Edmonton. He was 47,784 in attendance for the 2002 U-19 Women’s Championship final at Commonwealth Stadium, still the high-water mark for attendance in a FIFA junior women’s tourney.

As is always the case when Edmonton is named the host city for any soccer event, the 2002 nostalgia was evident.

“It springboarded women’s soccer in this country,” said Sinclair. “We hope that can continue with the under 20s and build towards the World Cup in 2015.”

Sinclair, Moscato and McLeod are training with the Canadian team as it prepares to face South Korea at Commonwealth Stadium Wednesday night.