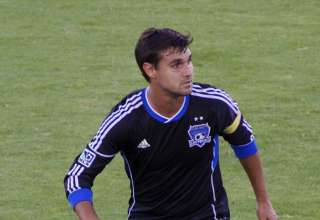 The fat lady hasn’t sung yet, but the Montreal Impact might be hearing someone practising scales backstage after dropping a 3-0 decision to the San Jose Earthquakes in CONCACAF Group 5 play in front of a sparse crowd at Buck Shaw Stadium.

The Impact has just three points from three Group 5 matches, with a home game left to Heredia, which will be played next week. The Guatemalan side is already at six points after just two games. The Impact needs to beat Heredia by a handful of goals and hope the Earthquakes, sitting at three points, also beat Heredia, but only do it by the skin of their teeth. Heredia is currently five goals ahead of the Impact on goal difference, the Earthquakes are four goals up.

To advance the Impact needs all the teams in the group to finish with six points each — and a massive shift in goal difference.

Head coach Marco Schallibaum put out a somewhat re-jigged starting XI with Evan Bush in goal and Daniele Paponi and Andrew Wenger up top while Felipe and leading MLS scorer, Marco Di Vaio, watched from the sidelines for the first hour of play while his opposite number, Mark Watson, went with his best XI from the outset.

The game began with both teams opening the throttle as play went end to end and each side had opportunities in the early going. Paponi had the first kick at the can in the opening minute, his try missing the mark.

Andres Romero had the ball at his feet and the time to set himself for a shot but passed instead only to have Wenger’s attempt blocked by a San Jose defender, the beginning of a difficult night for the rarely used Impact forward.

Midfielder Marvin Chavez’s seventh-minute cross found a diving Steven Lenhart in the six-metre box but his header was blocked by Bush.

Justin Mapp dribbled up the right side in the eighth, passing to Wenger, his shot blocked by defender, Jason Hernandez, this time out. The Lancaster, Penn., native also sent a header astray in the ninth minute.

The Earthquakes first marker came off a throw-in by Dan Gargan. It was gently headed on by Lenhart, falling into the path of an onrushing Chris Wondolowski. Cutting in front of Hassoun Camara he deftly tucked the ball home, looking more like the Wondo of last season than this year’s nine-goal man.

Play took a decidedly chippy turn after the ‘Quakes got on the score sheet with San Jose midfielder Sam Cronin earning four fouls in as many minutes between the 28th and 32nd, for over-aggressive or late tackles on Impact counterparts.

The Impact threatened for the balance of the first 45 minutes of play with Romero carrying the ball upfield in the 38th-minute drive and then passing off to Wenger who transferred it to Paponi. Just before reaching the former Serie A forward, it bounced up and met his shin rather than his boot, finishing its trajectory well up in the stands.

In added time captain Davy Arnaud managed to roll the ball through the six-metre box, but its path went unintersected.

The second San Jose goal, also off a set piece, came in the 57th minute. An inefficient clearance by Patrice Bernier was brought under control by Chavez at the top of the penalty area with a first touch and driven over a half dozen players with a second, dipping under the bar and into the mesh.

Schallibaum sent out Di Vaio and Felipe in the 63rd and took off Arnaud and Paponi, but the moves did not pay the hoped-for dividend as neither was able to play a part in engineering a late-game comeback.

Wenger had his fourth shot of the night in the 71st but, like the three before it, it came to naught. Electing to shoot from the left corner of the area rather than pass to Di Vaio in front of the net, he was left pounding the turf in frustration after completely misfiring and watching the ball roll out of bounds yards short of the near post.

The home side, undefeated in its last 14 matches at Buck Shaw Stadium, put the game away with a third goal in the 84th minute, once again taking advantage of a poor clearance on the part of an Impact player, this time Camara. The French defender’s attempt found Shea Salinas, who had subbed in for Chavez in the 74th, at the top of the area. He dribbled in and beat Bush with a shot into the right side of the goal.

The Impact’s next game is an MLS match on Saturday. It plays host to the Vancouver Whitecaps.

THROW-IN – San Jose supporters group Ultras 1906, raised a banner reading L’Union Fait La Force at this evening’s match in recognition of the support that Montreal Ultras expressed earlier this season. That came after the Earthquakes sanctioned its own supporters’ group, citing less-than-acceptable behavior as the reason for taking the measures.