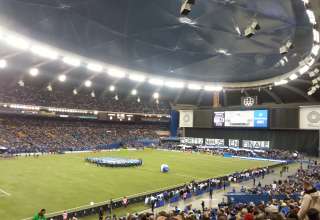 It would probably be a fool’s errand to bet that next week’s second leg of the MLS Eastern Conference Final will end in a 0-0 draw.

After what was close to a 45-minute delay because of improperly painted lines on the pitch, Tuesday’s first leg — in front of 61,004 fans at Montreal’s Olympic Stadium — saw the visiting Toronto FC supporters go from despair to joy. At the 67-minute mark, the score was 3-0 for the Impact, the Big O was rocking, and it was looking like the second leg at BMO Field was going to be nothing but a formality —  a wake by the lake.

But a 68th-minute headed goal from Jozy Altidore, coming seconds after substitute Tosaint Ricketts put an effort off the post, gave TFC the lifeline of a road goal.

And, in the 73rd minute, Michael Bradley slammed home the visitors’ second goal after the goalmouth scramble. Montreal fans will point to the fact Altidore could have been called for a foul in the sequence that led to Ricketts laying the ball off for the TFC captain, but they should really blame a confused midfield for allowing fullback Justin Morrow to make a penetrating run into the area. It was Morrow’s run that set off the mad sequence that led to the goal.

“I thought that our response was unbelievable,” said TFC coach Greg Vanney. “Obviously, it was not a good start to the game, but we’ve set ourselves up extremely well for the return leg. But, probably, the hardest work is in front of us, still.”

With the two road goals, it could be argued that the Reds actually have the advantage going home. And it’s unlikely the Impact can try to park the bus and hope for 90 minutes of scoreless soccer. Impact coach Mauro Biello has to assume that TFC will find the net at home, so he will need his team to continue its goal-scoring road form that it’s enjoyed so far in the playoffs.

“We scored six goals in our last two away games,” said Biello. “We know we can score and they need to beat us. We need to prepare according to this scenario. We will analyze the game and see how we can stop them and how we can hurt them.”

The game began after three quarters of an hour of pure comedy. The officiating crew came out for their pre-match pitch inspection, and it found that the penalty areas were far too small. The grounds crew had to cover up some of the lines with green paint, and then painted new white lines so the penalty areas would be the proper dimensions. It provided some excellent pre-game comic relief, breaking the tension that had been building over the last two weeks leading up to the the match.

Impact owner Joey Saputo apologized for the gaffe, but noted that the referees got to the stadium late, as well.

For the first 20 minutes of the game, TFC’s players looked like they were still waiting out the delay. They were flat-footed, and the Impact built a quick two-goal lead.

In the 10th minute, Canadian Patrice Bernier received a pass, swiveled and delivered an inch-perfect pass that sent Impact striker Dominic Oduro in behind TFC defender Nick Hagglund. Oduro then slotted the ball right through TFC keeper Clint Irwin for the opening goal.

Two minutes later, Oduro flicked a clever ball down the right wing for Ignacio Piatti, who dashed onto it, then smashed a low ball into the box that Montreal striker Matteo Mancosu smacked into the goal.

TFC looked dead and buried early in the second, when Impact defender Ambroise Oyongo made it 3-0 on what was a comical goal. A loose Montreal pass presented the ball to TFC star Sebastian Giovinco. Oyongo dashed up the field to try and win the ball, and Giovinco looked to pull out of the challenge. That allowed Oyongo to dash into what was an empty midfield. Honestly, he turned his head and looked around, stunned at how much room he had. The three-man TFC backline backed off and backed off and backed off, allowing Oyongo to get to the top of the TFC penalty area untouched. From there he put his foot into his shot, an ugly looking thing that somehow found the corner of the TFC goal.

It was a goal that was straight outta TFC 2007-15. Almost as comical as the lines gaffe.

And, at the time, it felt like it was the goal that put the stake through the heart of TFC. But, by the 90th minute, it ended up only being the goal that gave the Impact a razor-thin margin heading into the second leg.

It will be hard to say if this game, with two Canadian teams playing in front of the second-largest crowd in MLS history, will finally place the league in our national consciousness. Remember that the largest crowd in history gathered to see the New England Revolution play MLS Cup at home (the Revs lost to the Galaxy). It’s safe to say that the game had no real legacy, as today the Revs continue to be one of the most anonymous franchises in the league.

But, for tonight, soccer was king in Canada. And that was enough.