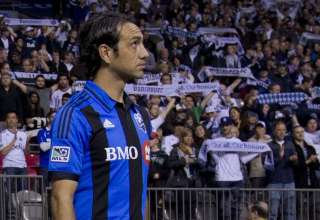 While the news itself had been released earlier in the week, the Montreal Impact officially announced that Marco Di Vaio would be returning to the fold next season. Team President Joey Saputo, Technical Director Nick De Santis and the Italian striker himself made it official at a media event at Saputo Stadium over the noon hour Friday.

“Even in difficult times, we find good news,” Saputo began. “Today I am happy to confirm that our Designated Player, Marco Di Vaio will be returning for the 2014 season. Even with the club holding an option on his services we’re very pleased that Marco confirmed that he wanted to wait a while before retiring and will continue his career in Montreal. His decision to return was greeted with joy by his teammates, the coaching staff, media outlets and both the club’s employees and its fans. “

“In his second MLS season he leads the league with 19 goals and is in the running for the Golden Shoe,” the Impact President continued. “He has played no fewer than 30 games, spending 2476 minutes on the pitch. He is tied for second in the league with five game-winning goals, which makes him a serious contender for the Impact’s Player of the Year honours.”

“Above all statistics,” Saputo enthused, “Marco is player who has proven his worth by his presence in the locker room and his leadership with our young players and, even at 37, he is a true professional and still has the desire to win.

“When we started our search for a DP we had criteria and expectations and Marco has met or surpassed them all. He is truly what a designated player should be and I hope that people around the league have noticed,” he said before mentioning that another player, one definitely not returning to the pitch in 2014, will be recognized in the last regular season home game.

“We will also be honouring the career of another special player tomorrow, one who wore the Impact jersey in 2012 and 2013, Marco’s good friend, defender Alessandro Nesta. I’m looking forward to seeing you at the stadium tomorow.”

“I’m very emotional because this is really a great day for me,” said Di Vaio. “I’d like to thank Joey and my family because it was not an easy decision to come to. I want to keep on playing but with my family situation it was difficult. I took a long time to make up my mind because I had to decide whether my family could stay alone in Italy for a whole year.

“My main desire was to continue playing,” said the 37-year-old. “It’s my life and with the support of Joey and my family I can continue to do what I love, playing soccer and scoring goals. I am very glad about that and I’d like to thank everyone because after the announcement was made that I was coming back to Montreal I got a lot of messages. That was very important to me.”

Di Vaio, who arrived in Montreal in May of 2012 with his wife and daughters in tow, saw his domestic situation turned upside down when family matters dictated they return to Italy, leaving Di Vaio alone on this side of the Atlantic.

“When I went to Italy in July because my mother-in-law had some difficulties, at that moment I thought I might retire,” Di Vaio admitted. “Because without having the family there in Montreal, it’s not the same. Afterwards, when the situation improved and my wife found some solutions for the family and my children started back at school, things improved with the family and my desire became to continue to play.

“This season has been a great one, one of the best of my career,” he offered. “So it would not have been an easy thing to stop now. I spoke with Joey and we decided to carry on together.”

“The family will stay in Italy,” he replied to a question about whether the family would be in one place when the next season rolls around.

“It was more difficult this year because we were not prepared for the change in situation but we have planned things out for next year. And we’re ready for it,” Di Vaio said. “My wife and the children will come over every two months and stay for a couple weeks each time. We’re going to spend the whole summer here together.”

With the Impact playing well below expectations in recent weeks, the matter of recent results and the team’s playoff hopes also came up.

Asked what the team could do to reverse the momentum that has seen them pick up only one of the last 18 possible points, Di Vaio had a one-word response.

“We all have to do our share,” he explained. “It’s not an easy situation but we know, after Wednesday night, when we played a good match, we have the confidence needed to change things. We do not have a lot of time left to do it, only two occasions. We know the games are very important for the club and for the fans. All is not lost, we still have a chance but after the results of the past five weeks there’s no room left for error. We must do something really important tomorrow.”

Technical Director Nick De Santis, recognized that the club is not in the best of positions but that the possibility of home games beyond tomorrow’s meet-up with the Philadelphia Union is not out of the picture yet.

“We were in a positive position and the last six games we only came away with one point so we have to be realistic,” he admitted. “But we’re still in the race, our fate in in our own hands and it’s up to us to react tomorrow at home with numbers behind us and a team that, I think, has worked very hard this week,” he offered.

“You saw in Los Angeles we played a disciplined game against a very good team and, once again, I think there was a penalty that wasn’t called. That makes three games in a row, something I hope is going to change in the next two games but I can tell you that the team’s energy level, their will to continue to work and fight for one another is still there.”