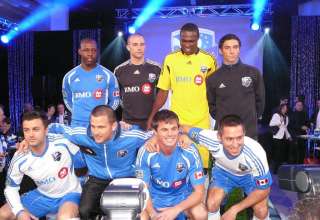 Blue lights flashed and bass-heavy beats thumped as the Montreal Impact revealed its new MLS kits in front of fans, media and invited guests at the Montreal Science Centre. In all some 20 Adidas garments were shown for the first time, with many of them being modelled by players and staff.

The team retains its familiar blue and white colours with keeper kits coming in yellow and black. Sponsor BMO has its logo on the chest while the Adidas logo occupies the right breast and the Impact’s crest, unveiled during the 2011 NASL campaign, is found on the left. The MLS logo is on the right sleeve while the left has a Canadian flag. Quebec is represented by numerous small, textured fleur-de-lys that cover the majority of the front of the garment.

Also paraded before the public for the first time was a blue cold weather coat modeled by former Canadiens’ defenceman, Patrice Brisebois, and new warm-up gear in basic black.

Eight players were present and available for comments before the proceedings got underway. Since the kits had yet to be presented, talk centred around matters on the pitch.

Incoming keeper, Donovan Ricketts, late of this season’s championship-winning LA Galaxy was asked what he could bring to the Impact’s start-up MLS season.

“With age comes wisdom,” the 34-year-old Jamaican replied. “At the back I can see everything that’s going on and if I have to I can settle the team down and find areas we have to work on. So, in short, experience.

“With the Galaxy we had a winning mentality and I want to win,” he continued. “I don’t know how it feels to lose games. I’m a winner and I hope to keep on being a winner.”

Twenty-year-old Zarek Valentin is the third player on the Impact roster to have spent time with the collegiate Akron Zips. Asked how many Zips were too many, the young defender laughed before answering.

“I don’t think there can be too many. I’m just happy that there are a few guys here that I feel comfortable with. They’ve already given me tours of the city, telling me where to go and where not to go. It’s great to have that wherever I go.”

He’s also picked out an area he’s like to call home while he’s in Montreal.

“I’m breathtaken by the area we’re in right now, Old Montreal. It’s beautiful. My decision’s made. I just hope I can find a place.”

Midfielder Josh Gardner is also pleased to be part of the Inpact’s inaugural MLS campaign.

“I’m definitely excited. I think Jesse and the coaches have put together a good squad. It’s nice to see the players that are coming in. They’re high quality and they’re going to bring experience and passion to the first year for Montreal as an MLS team.”

As to what fans can expect from him, the Texas native said, “A lot of energy. I’m someone who likes to get to the attack and keep the ball. I like to cross the ball and I feel that I have a pretty good left foot. I feel like I can put dangerous balls in on set pieces. I’m looking forward to the challenge of trying to get goals and assists and create plays for our team.”

Justin Braun, one of only two forwards on the roster at the moment, also expects to contribute offensively.

“It’s my job to go out and score goals. I think the fans can count on me giving my all, no matter what,” said the 24-year-old.

While the trade that brought him to Montreal came as a complete surprise, he sees it as a good career move and says he’s taking full advantage of the turn of events that saw him leave Chivas USA after a four-year stay. He also had a comment on the welcome that supporters have shown him.

“Fans have really embraced me as far as reaching out on Facebook and Twitter, saying how happy they are that I’m coming. It makes me want to be here even more and go out and perform well for them,” Braun said.

Testo still on radar, Ching still in mix
Technical Director Nick De Santis did not take part in the fashion segment of the evening but did answer questions about a couple players who have made headlines in recent weeks, saying that David Testo is still on the team’s radar and that it has not abandoned hope af coming to an agreement with Brian Ching.

“We haven’t had time to sit down with the staff over David’s situation,” he said before going on to say that it was a matter he hoped to consider in the next week.

Queried about the other half of the team’s forward corps, De Santis said, “I think with Brian’s situation we have to let the dust settle. What happened was very disappointing for him. In the end we’ll see. Once things settle down we’ll re-open discussions and see what his intentions are.”

“Do we want him here? Of course. He has talent, experience, savvy around the goal. If he wants to come here, great. If not, we have to try to get some value for him.”

Turning to the team as a whole De Santis declared that they were on the right track but was quick to point out that things are not always easy for the new kid on the block.

“Trust me, we’re very humble to the fact that an expansion team always experiences some difficulties,” he said, before mentioning that this was a consideration when selecting his playing personnel.

“Our main focus with the players we’re bringing in was their attitudes. Certain players have leadership qualities and we realize that when things get difficult we need the right players. Right now we feel comfortable with the players we have on board.”

There are presently 18 men listed on the roster, none of them Canadian. The Impact must sign three by March, when the 2012 MLS season gets underway.