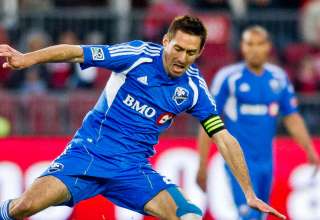 With three victories in as many matches, the Montreal Impact, who on Saturday defeated Toronto FC,sits atop the MLS Eastern Conference. Montreal prevailed by a 2-1 score despite not playing up to its potential.

Montreal controlled play in the opening half, heading into the interval with a 2-0 lead on the strength of a penalty-kick goal from midfielder, Patrice Bernier, and forward, Marco Di Vaio. Both players found the twine for the first time in the 2013 campaign.

“It was very difficult,” said head coach Marco Schallibaum after the match. “We had a good first half but we suffered a lot in the second. It’s part of growing as a team. We would have liked to play better but the important thing in football, from my experience, is coming away with the three points.

“I saw the players,” he continued. “They’re not happy and that’s a good sign. Because they know we were not good in the second half.”

“It wasn’t the kind of second half we wanted to have,” admitted captain Davy Arnaud.” If we’re going to be honest with ourselves, we weren’t in the second half, it was our worst half of the year, I would say, but we still came out with three points and in MLS you have to grind out results sometimes. That’s just the way it is. At the end of the day we leave with another win.

“The start of the second half we made some mistakes. We gave them some chances through our own mistakes and it gave them some momentum and they get the PK. Maybe last year, as a team, we would have buckled. Today we bent but we didn’t necessarily buckle and give up the second goal. If we do play like that for too long we’re going to lose games. We have to improve. We have to be better but I’ll take learning lessons while we’re winning, it’s a good thing.”

Things could have worked out differently had the home side not been able to adjust once central defender Alessandro Nesta had to leave the game in the early going, suffering what appeared to be a groin injury. The backline was reshuffled with Hassoun Camara sliding over to fill Nesta’s CB slot while incoming replacement Dennis Iapichino took a position on the left flank and Jeb Brovsky moved over to the right side.

Local product Bernier was at the origin of a play that saw Andres Romero feed a charging Di Vaio only to have his shot stopped by TFC goalkeeper Joe Bendik. In the seventh, the former Serie A star took a pass from Arnaud, but was once again thwarted by the TFC ‘keeper.

In the 11th minute Bernier had battled past three Reds before passing to an offside Di Vaio, who would have four shots on the goal in the opening half, setting new team record for a single game.

The Brossard, Que. native earned the 10th goal of his MLS career on a 33rd-minute penalty kick awarded after Ashtone Morgan had been deemed to have hauled down Romeroin the area. Bernier used the stutter-step run-up to the ball and, as happened on every attempt last season, the ball lodged itself in the back of the goal.

Montreal’s second came during added time just before the interval. Camara started the drive, slipping the ball to Arnaud. Showing a lot more familiarity and comfort playing alongside Di Vaio, he passed up to the Italian veteran who circumnavigated Bendik and potted his first of the 2013 schedule.

Toronto took the initiative in the second half, attacking the Montreal goal early and often with Troy Perkins holding firm on several attempts. The first, coming about five minutes after play resumed, was the result of a poor clearance on the part of the Montreal ‘keeper. Toronto midfielder Reggie Lambe’s shot was deflected off the woodwork by an alert Perkins, who almost immediately afterwards made a save on Robert Earnshaw, named MLS Player of the Week after last week’s two-goal performance against Kansas City.

A Toronto free kick from 25 metres out was punched away by Perkins who came in for praise from his gaffer for his work on the afternoon.

“He was as strong tonight as he was in Seattle and Portland,” said Schallibaum. “It’s crazy. He’s a very important goaltender for our team because he has this aura about him. He’s so calm. I take my hat off to him.”

Toronto finally did soil the score sheet in the 68th minute. Awarded a penalty kick by referee Baldomero Toledo after a ball-less Terry Dunfield was declared to have been tripped up, Earnshaw slammed home his third of the year.

“We have to give them credit. Toronto came out hungry in the second half but we made some mistakes that let them get back into the game,” said Bernier. “Troy made some saves but we made some easy mistakes in the final third. We’re happy with the three points but we know we didn’t play 90 minutes at our best.”

The next opponent for the impact is New York Red Bulls, who play in this season’s second and last Olympic Stadium game next Saturday afternoon.

THROW-INS – The Montreal Impact was among the more successful MLS sides at home in 2012 posting a 10-4-3 record when playing at Olympic Stadium or Stade Saputo. The 387,124 fans they drew were good for third –best in the league.

• Montreal midfielder Sanna Nyassi subbed in at the 85-minute mark and is a dozen minutes short of the 5,000-minute mark in MLS. Goalkeeper Troy Perkins’ next shutout, the 42nd of his career, will put him in 10th place all-time among MLS ‘keepers.

• The Impact begins Reserve League play next Saturday with a 10:30 AM kickoff against the New York Red Bulls second side.