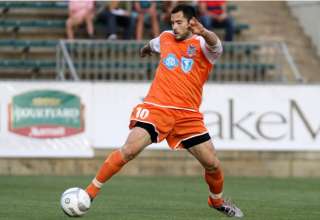 For the third time in less than two weeks the Montreal Impact met the press to impart details its transition to Major League Soccer next season. The first gathering was held to announce that the team had established a partnership with media giant, Quebecor, while the second informed the media that the planned expansion of Saputo Stadium had hit a few snags and would not be complete until after the 2012 MLS schedule got underway.

Today team President, Joey Saputo, Technical Director, Nick De Santis and Director of Soccer Operations, Matt Jordan spoke about things more directly linked to the team’s on-pitch activities with the signing of a coach and acquisition of player personnel being the focus of discussion.

“The most important thing is to be ready to start our first season in MLS on a high,” said Saputo in his opening remarks. “We are working every day to prepare the team for next year.”

De Santis, who has temporarily added head coaching responsibilities to his regular function, identified the club’s first priority as hiring a head coach.

“We are trying to put a coach in place as soon as possible. We have three finalists and we are presently continuing to determine who provides the best solution for the Montreal Impact,” De Santis said. “Once he is in place a lot of other things also fall into place. Of course he has to play a big part in our decision-making process going forward on all technical levels. We – myself, Matt and Joey – have to be on the same page as the head coach to go forward in our player selection and building the staff around the coach.”

He also said that the incoming gaffer would take a long hard look at the men presently on the Impact roster, saying that the men who have won only two NASL games since the schedule opened are under evaluation right now and shared the news of an upcoming evaluation session that could serve as a final examination for those hoping to graduate along with the Impact.

“We’re hoping to have confirmation soon on a Combine that will be held after the season for our current players and others that we’ll invite to see who gets the opportunity to move up to MLS,” he concluded.

Jordan went over other possible sources of new blood indicating that, unlike last season when two sides joined the league, the Impact will benefit from being the only organization taking part in this year’s expansion draft.

Once the existing teams have protected 11 men each, the Impact will essentially cherry-pick 10 unprotected players from the other teams. Once a team has lost one player, its roster is safe from further pillaging.

“Nick and myself are watching the majority of MLS games each week. We’re going through game reports, evaluating which players make sense given the way we want to build our team, which players we think fit well in this city and what players’ salary structures could work within the framework of a salary cap,” he explained.

Jordan spoke about the MLS Super Draft, in which Montreal gets not only the opening overall pick but leads off every round, saying the Impact’s task is to identify the best college players.

“We’ve developed relationships with many college coaches and our main focus and top priority is the top ten players in college soccer. We hope to meet with many of them to see who might be a good fit for us. We’re going to have a very busy summer but we’re looking forward to the process.”

De Santis then spoke of the need for established players and mentioned that he Impact has established relationships with teams in South and Central America, Italy and Scandinavia in their quest to fill out a roster before giving a bit more detail as to what type of players the team was seeking to anchor its foray into MLS.

“Our mission is to pick up three or four game changers,” he said.

“What positions do we want to fill with players with both the experience and skills that place them at a higher level relative to all the others?” De Santis inquired rhetorically. “At the moment we’re concentrating on a high-calibre central defender and a creative midfielder. Think of (Javier) Morales with Real Salt Lake or (David) Ferreira with Dallas — a guy who can make a difference either by scoring goals or making the final pass. If we’re talking about three or four players you can add a goaltender to the list too. These are the positions we want to have superior talent in. After that we’ll build the rest of the team around them.”

If the expansion and MLS SuperDrafts, combined with the influx of foreign stars performing as Designated Players were not sufficient to prevent the majority of the present-day Impact players from making the jump up in class with the team, Montreal also has first call on players presently in the NASL and USL.

“For example, Etienne Barbara,” said De Santis, referring to the NASL’s leading scorer to date this season and a man who has expressed interest in playing in MLS. “We can negotiate with him and have until March to confirm a contract with him or any other players in those leagues.”

It is expected that the next time the Impact summons the media to share information on the 2012 season it will be to announce the name of their new head coach.

While it is always a consideration in Montreal sporting circles, the ability to express oneself in French is apparently not the absolute necessity in soccer circles that it is for anyone hoping to run a big-league Montreal hockey bench.