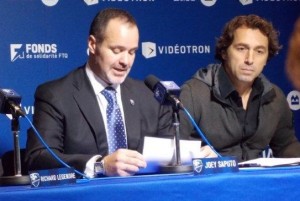 Asked just how important the Super Draft was for the Impact, since the club is seen as being one following a new European-influenced course, De Santis replied, “I don’t think it is a new philosophy, it’s a club philosophy. It doesn’t mean it’s a European philosophy. We’ve always had players from around the world as well as Canadian and Americans.

Queried what results the team would consider as showing a positive outcome in tomorrow’s exercise, De Santis replied, “We’ve spoken publicly about improving our offensive game even though most of our problems last season were on the defensive side of things. We’d like to pick up either another forward to complement (Marco) Di Vaio, (Andrew) Wenger and (Sanna) Nyassi or another outside player, a midfielder to help us improve on the flanks.”

A number of Canadian prospects go into the Super Draft with high hopes of emerging with MLS logos rather than college crests on their chests. Asked whether the Impact is subjecting any of them to particularly close scrutiny, De Santis spoke to the necessity of having homegrown players on the team.

“It’s always important to look at the Canadians. We do need to have three of them on the roster. When we think of developing the national team and young Canadian players, it is a responsibility to bring the better Canadian players along when possible.

“Kyle Bekker has had a very good week. He’s a player that has qualities but who also fits the profile of the type of player we want for our style of play and team philosophy,” De Santis offered. “He’s one of the players the whole league has in their sights since he performed so well this week. We’ve had an eye on him as far back as last year. There are other players we’ve got our eye on but Kyle had a great week and I think it’ll be very difficult to pick him up.”

The club is willing to try to swing a deal that would allow them to pick a little closer to the top, in hopes of improving their chances at obtaining the Canadian midfielder, who signed a MLS contract earlier this week.

No other team has been in contact with an offer that would result in Montreal moving up the ladder, which means that any discussions will have to come at the Impact’s initiative.

“There’ll be more meetings tonight to see who might be available in the eighth spot. We’re also going to look at improving our draft position. We’ll see what that comes of that. Moving up is to give us an opportunity not only vis-a-vis, the other Canadian teams but the U.S. teams as well. Chivas has already announced that they’re going after (Carlos) Alvarez so that helps us out. The idea is to move up with an eye to picking Bekker but it won’t be easy,” De Santis concluded.

As it stands now, Montreal is slated to draft in the eighth spot. Toronto goes third and fourth while Vancouver chooses fifth. .